This morning, Netflix announced it will premiere its first animated series this Christmas Eve. Here’s what Santa will be bringing to a streaming service near you:

1. The Series is a Spin-Off of the Film ‘Turbo’

Dreamworks Animation premiered Turbo this past summer. While the film proved to be the lowest grossing in the history of the studio, it’s still expected to return a significant profit off the strength of foreign ticket sales, and the partnership with Netflix, at least that’s what Dreamworks’ President Jeffrey Katzenberg told Deadline.

The animation for the series will be rendered in a 2D, “flat” style.

2. ‘Turbo Fast’ Will be the First Netflix Original Series to be Released Incrementally

All previous Netflix originals have been released by the binge-full, with a full season’s worth of episodes appearing simultaneously on the streaming service.

In contrast, Turbo F.A.S.T. (Fast Action Stunt Team) will debut its first five episodes on Christmas Eve, with others to follow in the coming year.

Netflix Chief Communications Officer Jonathan Friedland told Variety that the staggered release does not indicate a change in philosophy, rather a concession to the practical demands of animation:

“Production on animation is (on a) different timetable so we chose to make the episodes that are ready now, available for viewers as they were ready.”

3. Dreamworks Animation and Netflix Have a ‘Pact’

According to “Variety”, the two studios have an agreement under which Netlfix will develop “more than 300 hours of exclusive programming based on DWA (Dreamworks Animation) characters.”

This is the biggest partnership Netflix has ever entered into for original content.

4. Turbo is a Snail Who Can Race Fast Because There’s Nitrus Oxide in his DNA

Turbo FAST starts where the Turbo film left off, as we follow all our favorite animated snail stuntmen, Turbo, Whiplash, Burn, Smoove Move, White Shadow, Skidmark and
Chet as they go on daring, racing-related adventures.

Despite being a notoriously slow miniature mollusk, Turbo becomes a competitive racer by wandering onto the freeway and getting sucked into the super-charger of a drag-racer, thereby fusing nitrus oxide into his DNA. A valuable lesson for all kids looking to improve their speed.

Turbo Fast will join House of Cards Orange is the New Black, Arrested Development, Hemlock Grove and Lilyhammer as the sixth Netflix original series to premiere in the last two years.

This past June, Matt Yglesias of Slate wrote about why getting a robust bundle of original programming might be key to the company’s long-term profitability:

“The basic problem with Netflix streaming is that it seems to be caught between the folks who own copyrights (movie and TV studios) and the folks who own broadband pipes (cable and telephone companies)…Netflix’s best shot is to scale up very quickly while the “bundle original content and distribute it to subscribers via broadband” strategy still looks marginal enough for others to ignore.”

Netflix currently plans to invest up to 15 percent of its content spending on original material. 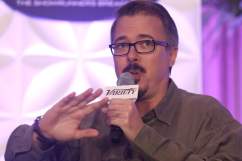