Erin Wagner, the 27-year-old Canadian who has been dating Justin Bieber’s dad for seven years, is in the spotlight amid cryptic tweets and rumors of a breakup.

Here’s what we know about the mother of Biebs’ half-siblings, who’s home with the little ones while Jeremy parties with his famous adult son.

Her children are Jazmyn, 5, and Jaxon, 4. The Daily Mail reports that they are sharing custody of their little ones.

2. She Tweeted About Her Relationship

This is all I need…. pic.twitter.com/xMsI3pnejZ

In mid January, she posted that quote on Twitter, fueling rumors that her relationship with Jeremy is unstable.

Hard to believe sometimes that things can get better! Trying to keep going!

On her Instagram profile, she listed that she works for Fibernetics.


On the company’s website, it says it is “one of Canada’s fastest growing and largest telecommunications companies.”

4. She’s Angry at Jeremy for Partying With Justin All the Time

Jeremy split with Justin’s mom, Pattie, when the singer was 13 years old.

The Daily Mail reports that although Wagner is close to Justin, she does not approve of her boyfriend’s constant partying with his adult son.

Jeremy tweeted this sentiment recently, which seems to confront the trouble his son has been in lately:

I can protect my kids, but I can't protect them from you and your lies. Believe in the truth not in the lies of the enemy. #reallife

5. She Has Allegedly Split From Jeremy

According to the Daily Mail, the couple are living apart at this time. The above picture shows the family during happier times, enjoying lunch at a sushi restaurant together. 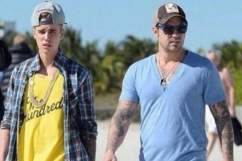