Robin Wright steps into the directors chair in chapter 23 of House of Cards season 2. With the U.S. at odds with China and Frank stepping up his war on Raymond Tusk, Claire also finds stiff opposition from Jackie Sharp.

1. There’s a Threat on Claire’s Life

We being with a suspicious looking deviant getting arrested by the Underwood’s security detail and local cops. He’s a former Marine, carrying explosives. It’s determined that Claire, not Frank, is the target due to her pro-choice statements. The Marine is thought to be behind the sending of the white powder as well!

2. Frank is Turning the President Against Tusk

Frank leaks Tusk’s Chinese/Casino relations to the Wall Street Not Journal through his new protege, Seth. Dots are connected and Tusk is on the defensive. The president realizes that his links to Tusk could be problematic when it’s revealed that the billionaire backer has been treating Chinese associates to nights on the town at a casino. Tusk in-turn tells Remy to turn up the heat against Frank’s underling Jackie Sharp. Which is difficult, cause they’re in love and all that.

Claire is looking forward to getting her new anti-sexual assault bill out there but Jackie Sharp ain’t too impressed with it, in fact if Claire doesn’t change the wording, she’ll campaign against. Frank has an angry exchange with Sharp too, and drops it that he knows about Remy and Sharp’s affair. Damn.

American and China are coming closer to conflict. Boring.

Well this has been coming, Doug Stamper doesn’t like Seth. He feels he’s becoming second favorite and accuses Frank of undermining him in front of Seth. There’s a nasty, tension filled stand-off between the pair. Now this is interesting, what if Doug turned on Frank? What the hell would happen then? There’s also this kind of weird/creepy thing about how Doug likes it when Rachel, is prostitute/runaway project, reads to him. Some biblical stuff and Dickens’ Tale of Two Cities. Symbolism. It’s fantastic. 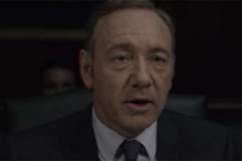