In the world of continuous superhero reboot films and shows, Fox is about to add one more. Gotham will be to Batman what Smallville was to Superman, watching the hero as a child. Today, Deadline reported that 14-year-old David Mazouz would be playing young Bruce Wayne, destined to one day become Batman.

Here is what you need to know about the new Bruce Wayne:

1. He Previously Co-Starred in ‘Touch’

Mazouz played Keifer Sutherland’s autistic son in the short-lived Fox drama Touch. The show ran for two seasons, or 26 episodes, between January 2012 and May 2013.

For his work in the show, young Mazouz was nominated for a Young Artist Award in the category of Best Performance of a Leading Young Actor in a TV Series.

According to his imdb bio, Mazouz was born in Los Angeles to a French father and American mother. He began studying musical theater at a very young age.

Before Touch, Mazouz had walk-on roles in The Office, Mike & Molly, Criminal Minds and Private Practice.

3. Gotham Will Be a Prequel for Many Batman Characters

Along with young Bruce Wayne, Gotham, will present the backstories for a number of other popular Batman characters, including Alfred, James Gordon, Penguin, the Riddler and Catwoman.

The show will have a lineup of some TV luminaries, including The O.C.’s Ben McKenzie as a young James Gordon, Donal Logue of Terriers and Grounded for Life as Detective Harvey Bullock, and Jada Pinkett Smith as the series’ villain, ruthless gangster Fish Mooney.

The show will premiere on Fox for the 2014-2015 television series and began filming in New York City in March 2014. 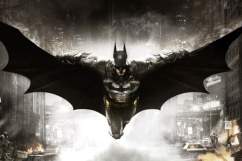