Idina Menzel became a Broadway name with her performances in Rent, Wicked, and Glee. Now, Hollywood has recognized her for talent in Frozen, where she lends her powerful voice to the movie’s soundtrack. Her name has also brought her much publicity lately since John Travolta mispronounced it at the Oscars. Here’s all you need to know about the gifted singer and actress, who now has an alter ego in the form of “Adele Dazeem.”

1. She Recently Divorced Taye Diggs & There Were Rumors He Was Cheating

The couple, who met on the set of the Broadway musical, Rent, seemed to have a perfect marriage.

Then Star magazine reported in July of 2013 that the actor was being intimate with another woman at Emerson nightclub in Hollywood in June.

In December of 2013, Us Weekly reported that the famous couple had split.

Her rep told the magazine:

Idina Menzel and Taye Diggs have jointly decided to separate at this time,” a rep for Menzel tells Us Weekly. “Their primary focus and concern is for their son. We ask that you respect their privacy during this time.

The couple has a son, Walker Nathaniel who was born in 2009.

She told Elle that he is her priority, over her successful singing and acting career:

If I want to tuck my son into bed and read him a story but that means I have to take a red-eye to get to a concert—which  I would never think of doing otherwise—that’s just the way it is. Even if I can’t hit the note that night, I got to tuck my child in! And actually I usually have a better show.

2. John Travolta Butchered Her Name at the Oscars & It May Be Boosting Her Ticket Sales

In what was arguably the biggest Oscar flub this year, John Travolta pronounced her name as “Adele Dazeem” when introducing her “Let it Go” performance.

In the above clip, you can see the slip up and Conan O’Brien’s spoof on the mishap that will live in infamy.

There has been a silver lining for Menzel in all this. It has been reported that all the talk has advanced her career. After all, 43 million people heard Travolta’s gaffe, which resulted in an increase in Menzel’s Twitter following.

According to the Daily News, Karen Post, author of Brand Turnaround, said:

Both on and off Broadway, the fun and games at Menzel/Dazeem’s expense could be the best thing that ever happened to her. As far as her career, she’s getting buzz that opens doors.

Menzel’s current project is headlining If/Then, a musical currently in previews on Broadway. According to Variety, she plays a “38-year-old Arizonian named Elizabeth who has relocated to New York, where fateful choices seemingly abound.”

Menzel is Elsa the snow queen in Frozen, alongside Kristen Bell, who plays her sister.

The movie was a hit at the box office, which no one, even Menzel, could have predicted. Entertainment Weekly reported earlier this month that it had hit the 1 billion mark in worldwide revenue.

A few days before the movie opened in late November, she told azcentral:

I believe it says the right things and has the scope to appeal to a large demographic of people, that it could be that thing. But mostly I’ve just always wanted to be in a Disney animated movie, and then to have a great song on top of it is just the best. It’s really a dream for me.

Since she bears an uncanny resemble to Lea Michele, it’s only fitting that she plays her birth mother, Shelby Corcoran on Glee.

According to Glee.wikia, fans of the musical comedy actually lobbied to have Menzel be cast as the mother because she looked so much like Michele. The fans got their wish, and Menzel has already appeared on 12 episodes of the show as a recurring character.

Menzel told Broadway.com about her experience on the musical show and whether or not she’ll return in future episodes:

Well, I think I’m finished, but Ryan Murphy keeps everything close to the vest. I could get a call tomorrow saying, “they want you for eight episodes,” though I haven’t heard anything of late. I loved that experience; it’s such a groundbreaking show.

Me and @idinamenzel on set having the best day ever:) #Glee pic.twitter.com/jRdJJpF3zd

5. She Won a Tony for Playing the Original Green-Faced Witch in ‘Wicked’

Menzel originated the role of Elphaba, the Wicked Witch of the West, in Broadway’s Wicked.

She told Playbill about the show’s themes:

The two main ones — the story of the friendship of these two women and how they, through striving for truth in themselves, they really give a wonderful gift to each other and change each other forever. 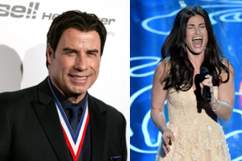