Logan Lerman will be rocking the boat in Noah, the religious epic out in theaters on March 28.

In the highly buzzed-about film, he is Ham, son to Noah, played by Russell Crowe.

It seems that America loves bad boys because the paper also reported that at the movie premiere in New York City, he “had to fend off the advances of several femme fatales” with his costar Douglas Booth.

Here’s all you need to know about the 22-year-old and his blossoming career.

1. He Has Starred With Emma Watson Before

They appeared together as high school students in the indie film The Perks of Being a Wallflower.

Watson dished to MTV about how kissing Lerman on set made her feel safe:

I mean, when I read our first kiss scene, it’s so epic. It’s like the most beautiful scene I’ve ever seen written on a page.And it was like, ‘Oh, we’re going to have to kill this one!’ Like, it’s so good, I wanted to do it justice. And it’s so emotional and we’re both so vulnerable in it, but the main thing was I get to do it with Logan. He makes me feel so safe, so it’s going to be fine, which made it fine.

The pair became close on that film, having almost every scene together.

He told Examiner how they helped one another out:

[With Emma], it was so great to have a friend that you can rely on in that kind of environment. Like lean on in tough times. It was really nice to have her there.

Therefore, it was a celebrated reunion for them on Noah.

In the first scene he filmed for the religious epic, he was with Watson.

Our first scene that we had to do in the film was together, fortunately, and we were like, ‘Oh thank god. This is comfortable.’ In this intense environment we have this comfortable relationship, and we just relied on each other. It was really, really, really nice.

We barely worked together on this film. We’d be in the same scene, but we didn’t really have intersecting story lines. But it was fun to have a friend around. She played my sister this time, which was kind of cool.

He also gave her this sincere accolade for her work on Noah:

I love working with Emma. She’s so good in this movie so I’m really proud of her.

2. He Was in Two Movies With Mel Gibson in the Same Year

Lerman played the younger version of Gibson in What Women Want in 2000.

That same year, he also played Gibson’s son in The Patriot.

Examiner asked him if the older actor had any influence over him.

Oh, you mean my drinking buddy??? (Laughs) I’m kidding. No, I honestly don’t know him at all. S***, I mean how old was I? I don’t really have any really conscious memory of that time period at all. But it would be interesting to see him…I don’t know. S***.

This talent follows him on-set, and he is known to write music for his costars.

During the filming of The Perks of Being a Wallflower, he even wrote Watson a song.

4. He Played a Fantasy Hero

For the 2010 movie adaption of the Rick Riordan book series, Percy Jackson & the Olympians: The Lightning Thief, Lerman won the titular role.

In 2013, he was in the sequel, Percy Jackson & the Olympians: The Lightning Thief.

He bonded with his castmates, Alexandra Daddario and Brandon T. Jackson, pictured above.

He told Just Jared about his costars turned friends:

Most of us worked together in the first one. We were all tight and we didn’t really have anybody that we disliked on the first film. And then we had our new additions, Leven [Rambin] and Douglas [Smith], who were there like the whole time really. They’re good guys. We had fun together. It was fun and very light on set.

5. He Chose Acting Over the Family Business — Prosthetics

At a young age, his surroundings influenced him to pursue acting as a career path.

He told Just Jared, “I think we’re all products of where we’re from and I’m from Los Angeles, which if you look at it, the only culture there is Hollywood. I guess that probably had a big influence on the reason I like movies so much.”

On his first ever appearance on Jimmy Kimmel Live, the talk show host brought up the website of his family’s prosthetic business, operating in Southern California since 1915.

Although Lerman’s father joined the prosperous business, he never pressured his son to follow in his footsteps.

Lerman told Kimmel, “No, I wasn’t really pressured at all. I mean, I was acting so young. But I think they wanted me to. I’m sure that they did.” 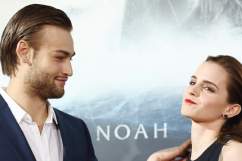