French Montana has come a long way from his Bronx roots. The 29-year-old has a successful music career despite the many hardships he’s endured in his life.

The latest news about the rapper is that he may have a new reality-star girlfriend.

Here’s what you need to know about the man — real name Karim Kharbouch — who might have stolen the recently single Khloe Kardashian’s heart.

1. He Collaborated With Drake & Lil Wayne

The above video is for his song, “Pop That,” featuring the two.

It was the first single off his debut CD, Excuse My French, and earned a place on the Billboard Hot 100.

He told Ask Men about his debut record:

I know it’s going to last forever. I know once people hear it, people will be like, “Damn. This is really it.”

The incident happened in New York while he was leaving a recording studio. He told Hip Hop Wired:

So I come out the studio, I’m walking like this. All I see is just two ni–as..two hammers [guns], at my head,” remembered French. “As soon as everybody started moving in on me, everybody ran. So I’m the only one stuck. I’m stuck, feel me? I got shot [in the] back of my head. Somebody died back there.

In an interview on The Combat Jack Show, he said, “It was just like being at the wrong place at the wrong time.”

He also admitted that he’s moving on with his life and not dwelling on the past.

When asked what he was thinking during the injury, he said, “You just sit there and really go through the moment.”

He talked about the joys of being a father:

I love it, man. The most beautiful thing is making him smile. They don’t know nothing when they that small, you just want to help them.

He also admits that he wants his son to experience reality as he did, and won’t shield him like other parents tend to to do.

4. He Had to Support His Family When His Dad Left

He was born in Morocco and moved to the Bronx. The above picture shows Montana and his neighbor, J Lo, also raised in the Bronx.

The pair collaborated for the song, “I Luh Ya Papi.”

Montana’s father moved out when he was 17, leaving the teen to provide for his mother and two younger brothers.

He considers that situation to be the biggest trial he’s encountered, saying:

5. He May Be Dating Khloe

TMZ reported that the reality star accompanied the rapper while he checked out a possible new home.

They were also spotted together at Pink Rhino in Phoenix. They also have video of him entering the place with his arm around her. 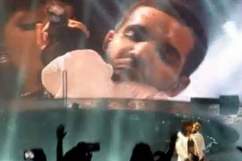