There’s a new girl group in town and it’s called G.R.L., which is a play on the word “girl.” It’s made up of five sexy women and we’ve got the scoop on each of them.

1. Pitbull Recently Teamed Up With The Group

Pitbull and the G.R.L. ladies teamed up for a new hit song titled “Wild Wild Love,” which they performed on the Today Show and SXSW together recently. They also just came out with the music, which you can view above. 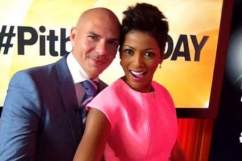 2. These Girls Have an “Ugly Heart”

Simone Battle, Paula Van Oppen, Lauren Bennett, Natasha Slayton and Emmalyn Estrada are the girls of G.R.L. Their single is titled “Ugly Heart” and we’ve got the lyric video for you right here. Check it out.

The official single is set to drop in May 2014.

Presently, G.R.L. is in the studio with high-profile producers Max Martin and Dr. Luke as they work on their debut album. Natasha Slayton told People:

It all came together pretty organically and naturally.

The group was formed by Robin Antin, who also put together The Pussycat Dolls. After holding auditions, the new girls made their debut in 2012 as part of GoDaddy’s TV commercial for the Super Bowl. The five hotties who are in the group now were not the originals, however. According to Wikipedia:

On April 13, 2012, it was announced that Chrystina Sayers was no longer a part of the new line-up. In July 2012, the line-up was announced consistent of Bennett and Van Oppen, with new members Natalie Mejia (from Girlicious), Amanda Branche, and Natasha Slayton thus confirming Jenkins’ withdrawal from the group. In August 2012, publicity photos showed the ‘new’ line-up including Simone Battle replacing Branche. In November 2012, it was revealed through the hiring of Emmalyn Estrada, that Mejia was no longer part of the group. Mejia announced that she was expecting her first child with her husband, and due to her situation she made a choice not continue with the group.

Antin originally put the group together to replace The Pussycat Dolls, but realized she wanted to give them their own identity as a group.

4. Each Member Was Working on Solo Careers Before They Formed G.R.L.

The group was formed in 2012. Apparently, each of the girls were doing their own thing and trying to make it as solo artist when they got together. Group member Simone Battle revealed to People:

We’d all been pursuing careers in the industry on our own, individually, but once we found each other, we realized we wanted to do it together. It felt so right. The chemistry was perfect.

Their debut single was titled “Vacation” and it was on the soundtrack for The Smurfs 2.

With five women working together in addition to some of them living together, so, of course, they have their squabbles, but they insist they’re like sisters and they always make up.

Click the “Next Page” button for hot photos of the girls and to hear individually about each member of the group, see their hot photos, and check out some of their music videos.