Shakira performed her latest single “Empire” on The Voice tonight with a fiery and super sexy performance. Overall it was an amazing set, though it became pretty obvious that our beloved Shakira was lip-synching. We know it happens, but it’s hard not to notice on a live singing competition show. 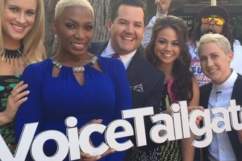 T.J. Wilkins & Dani Moz Get Eliminated Off ‘The Voice’

Read More
Celebrities, Reality TV, Shakira, The Voice
Shakira gave a sexy performance on The Voice tonight, but there was a little lip-synching going on. We still love her though, right? Check it out.