If you haven’t heard of The Janoskians, then you’re probably living under a rock. The Janoskians stands for “Just Another Name Of Silly Kids In Another Nation” and consists of five guys who make hilarious YouTube videos. These pranksters hail from Melbourne, Australia, but their fame has brought them to Los Angeles. Fortunately, The Janoskians have taken time out of their increasingly busy schedules to talk about themselves, their music, their stunts, and why fans are so taken with these five guys.

1. Beau, Luke, Jai, James, and Daniel Are The Janoskians

Three of the five boys are brothers, Beau Brooks is the oldest, while Jai and Luke are twins. Then, there’s James Yammouni and Daniel (Skip) Sahyounie. Daniel and Beau finished high school but Luke, James, and Jai dropped out to focus more on their group. So, what are some of the things you may not know about some of your favorite five? Beau revealed:

My second toe is bigger than my first.

Jai let us know that he has facial twitches and James revealed that before The Janoskians, he wanted to be a lawyer. Want some other fun info about the boys? We’ve collected a few miscellaneous facts from Wattpad.com … Luke doesn’t like girls who swear and when he was 8 years old, he was in a commercial that aired in Japan. Jai used to date Ariana Grande and he hopes to get arrested one day. Beau used to work in a pet salon and is scared of the dark. James can speak Arabic and always enjoyed doing homework. Lastly, Daniel had his first kiss when he was 6 years old and doesn’t like girls who spit.

2. The Boys Were Victims of Bullying in Their Childhoods

Growing up, The Janoskians apparently weren’t always considered to be the cool guys that we all know they are today. After overcoming childhood bullying, they have joined forces with the Bully Free Australia Foundation to give back to a great cause. The Janoskians told us:

We really enjoyed working with them in the past. As victims of bullying ourselves, we believe we need to stand up for those that can’t always stand up for themselves.

The vision of the Bully Zero Australia Foundation is: to protect and empower Australian children and adolescents to live a fulfilling life free from all forms of bullying.

3. The Janoskians “Talked Dirty” on the One Direction Boys

THE TALK DIRTY DANCEJust a fun little random video we did for you guys to show our appreciation towards you, Janoskian style (: http://www.twitter.com/janoskians http://www.facebook.conm/Janoskians2013-08-13T15:24:52.000Z

The Janoskians put out a video called “The Talk Dirty Dance” in August 2013, which was dedicated to fans. The caption of the video read:

Just a fun little random video we did for you guys to show our appreciation towards you, Janoskian style.

Their video has amassed well over 3 million views and incorporates Jason Derulo’s song “Talk Dirty To Me.” Check it out in the above video.

As part of One Direction’s live stream event 1D Day, the boy band put together their own parody video of The Janoskians’ video “Talk Dirty To Me.” When The Janoskians saw it, they said that the One Direction boys “have good taste.” Have a look at the 1D video below:

In a previous report by Wattpad.com, it was written that Janoskian James “thinks One Direction is awesome and he wants Louis to follow him.” 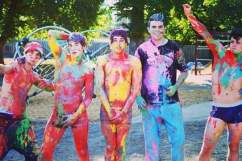 WATCH: The ‘Talk Dirty To Me’ Dance Video by the Janoskians

4. They Recently Signed a Record Deal

Not only are these guys comedians and jokesters, they’ve recently scored a big record deal. The guys reveal:

We partnered with Republic records after thinking about what was right for us. We chose them because they like us for who we are, don’t want to change us, and allow us our creativity and freedom.

So, what makes their fans love them so much? Here’s what the guys have to say about what keeps their fans so dedicated and loyal:

We are unpredictable and real. So, things happen in real time and the fans like that. We might be electrocuting ourselves on a Sunday and singing on a Monday. We keep it fun.

5. These Guys Are Dirty Pigs

LIMITED TIME SALE. Get the Tie Dye Face t-shirt for only $24.99! http://t.co/CahDf3UvOa pic.twitter.com/plB5hkVJgE

In case you didn’t know, The Janoskians represent a clothing line called Dirty Pig. The message of the Dirty Pig brand isn’t just about a fun style. It also is connected to their work against bullying. The “About Us” section on the site reads:

Born and bred Aussies, the Janoskians represent what being a Dirty Pig is about. Be yourself and don’t let anyone tell you otherwise. Dirty Pig is the intersection of freedom, style, and individuality. As ambassadors for the anti-bullying campaign in Melbourne, Australia, the Janoskians created Dirty Pig to represent their belief that everyone should be themselves. Individuality is what makes this world such an amazing place, and we are here to reinforce this belief. Be yourself and be a Dirty Pig!

Be sure to click the “Next Page” button below to hear about James’ music, the group’s big plans, their grossest challenge video, and the craziness the guys brought to the 2014 MTV Movie Awards.

Pages: 1 2
Read More
Bullying, Celebrities, The Janoskians, Twitter, Youtube
The Janoskians started out as a YouTube sensation, but have grown into so much more. Check out our exclusive interview with the guys and get the 411 on them.