We’re huge fans of the Teenage Mutant Ninja Turtles, which is why we’ve trying to soak in every trailer released for their 2014 film reboot. An extended version of the 1st trailer has been shown for the upcoming film and it gives fans a much clearer look at the genius turtle that is Donatello, some rad skateboarding and the Turtles’ most infamous nemesis Master Shredder.

That new trailer can be seen above, so go ahead and enjoy this new look at TMNT 2014! 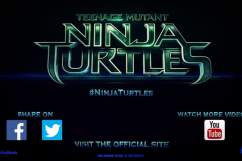