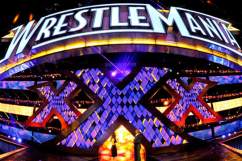 Check out all the live results and highlights below as they come!

Winners: And still the Tag Team Champions, The Usos!

Best Moments/Highlights: Curtis and Jey Uso started things off. After a heated exchange where Axel landed a stiff dropkick, Ryback entered the match. Ryaback was ready to go into a rampage, but one of the Matadores tagged himself in Los Matadores hit a beautiful Enzuguri/dropkick combo. After Cesaro entered, each man soon found themselves outside the ring. Once all of the competitors fell out the ring, both Matadores members did a plancha onto everyone. El Torito got to have his Mania moment when him and his Matadores team members dropped Axel onto everyone on the outside. Swagger eliminated one of the Matadores after making him tap to the Patriot Lock. The match continued with Ryback landing a sweet vertical suplex to Jimmy Uso. Rybaxel beat down Jimmy Uso for the remainder of the match. Ryback locked in a nice cross-arm lock submission, but Jimmy fought out of it and managed to get Ryback to launch his shoulder into the corner ringpost. Jey got the hot tag and started going to town on Axel with his signature comeback offense. Swagger countered Jey’s attempt at plancha with a powerslam. Ryback tagged himself in and gave a spinebuster to Jey and cut Swagger with his Meat Hook lariat. Ryback got eliminated though when Cesaro hit him with a Swiss Death Uppercut and a Neutralizer. The Usos and The Real Americans were the last two teams remaining. Both Usos launched themselves onto the Real Americans on the outside. Cesaro got in some stiff offense with his uppercuts, but the Usos came in swinging with superkicks and Samoan Drops. Both The Usos eventually got the victory when they both hit Cesaro with a double Superfly Splash.

Best Moments/Highlights: Triple H and Daniel Bryan were about to shake hands, but Bryan kicked HHH’s hand away and went for a school boy pin. He only got a two count, though. Once HHH and Bryan finally locked up, Bryan dominated him with a headlock followed by a sweet dropkick. HHH powered out of a 2nd headlock attempt and gave Bryan a shoulder block. Bryan got back up and laid in European Uppercuts and kicks to HHH afterwards. HHH started his methodical body work and began working Bryan’s injured shoulder/leg. Bryan caught HHH with a nice Tornado DDT to the outside of the ring. Bryan took HHH down with a nice splash from the top rope to the outside. HHH got real cerebral when he dropped Bryan’s shoulder into into one of the announce tables. HHH then went to work on Bryan’s screwed shoulder. HHH also worked on Bryan’s shoulder on the ring apron when he dropped him with a wrist lock back suplex. HHH put Bryan into a nice Crippler Crossface, but Bryan fought out of it. Both men went into crowd feuding punches, which Bryan got the best of. Bryan landed two awesome German Suplexes, but HHH upped the ante when he landed a rare Tiger Suplex on Bryan. Bryan got HHH on the top rope and brought him back down with a powerbomb. Bryan got to hit two dropkicks in the corner, but HHH countered the third one with a nice Lariat. Brayan went for a Diving Headbutt, but HHH countered him with a knee to Bryan’s injured shoulder. HHH put the Cripple Crossface back in, but Bryan eventually fought out of it and put in his YES! Lock. HHH caught the ropes just in time in order to avoid tapping out. Bryan then went on a rampage and hit HHH with two planchas and plenty of kicks. Bryan landed his usual array of kicks to the delight of the crowd. Bryan went for his finishing knee, but HHH countered that with a Spinebuster and a Pedigree. Bryan kicked out at the two! HHH went for another Pedigree but Bryan suplexed him over his back for a two count, but HHH kept Bryan locked in the Pedigree position. Bryan surprised HHH with his finishing knee strike and got the 1-2-3!

Best Moments/Highlights: Dean and Kane started things off with a nice rebound lariat on Kane. Once Reigns entered the fray, he dropped Kane the Outlaws with Samoan Drops and Superman Kicks. Rollins launched himself over the top rope onto Kane. The Shield dominated the rest of the match. Roman speared Kane and soon The Shield landed double powerbombs on the NAO for the win.

Best Moments/Highlights: Once the Battle royal got underway, bodies were flyign everywhere, Brodus Clay and The Great Khali got eliminated pretty quickly at the start. Mark Henry eliminated several stars, but Big Show took him out anyway. Several other stars got put on the ground. Big E had a great moment when he powered Justin Gabriel over the top rope. When Fandango got a little too hype and started dancing on the ring apron, Sheamus pounded his chest with punches and eliminated him. Big Show used his power to take RTruth out of the fray. Tyson Kidd got a nice side kick from Alberto Del Rio and fell off the top rope for his elimination. Rio got even more great eliminations, but Rey got in his 619 to a prone Rio to stop him. Cesaro started going to town on the other Superstars with Swiss Uppercuts and more. Kofi had an amazing moment where he fell out of the ring, but he made sure to avoid elimination by keeping one foot on the ring steps. Kofi made his way back and went crazy, but was soon put down by Sheamus with a Brogue Kick to the outside. Rio and Sheamus got each other eliminated and left Cesaro and Big Show as the last two competitors. Cesaro amazed the crowd by body slamming Big Show over the top rope. Cena used the chair instead to lay out Rowan and finally got the win with an Attitude Adjustment.

Best Moments/Highlights: Bray laid down on his knees and begged Cena to finish him, but Cena declined and locked in a headlock to get things going. Bray fought out of it and put down Cena with nice side jab. Bray spoke to the crowd as he broke down their hero with kicks, punches and headbutts. Cena dodged a Bray body splash in the corner and put Bray down with a clothesline. Luke Harper and Eric Rowan hopped up onto the ring apron to distract Cena from his match with Bray. Cena began to get a bit more violent by dropping Bray with a nice Yakuza Kick. Bray soon recovered and hit Cena with a side kick to the gut and a Falcon Arrow-esque suplex. Once Bray locked a Sleepr Hold onto Cena, the match slowed down. Cena went into overdrive and landed his signature comeback maneuvers on a prone and weekend Bray. Once Cena went for his 5 Knuckle Shuffle, he stopped dead in his tracks after the sight of Bray in his spider-like position caught him off guard. Bray stuck Cena in the corner of the ring and splashed him. Cena eventually came back to life and landed a sweet Tornado DDT off the top rope for the two count. Cena went back to the top rope for his top rope leg drop, but Bray countered with a powerbomb and only got a two-count. Cena shook off the damage he received and went into his signature comeback once again, but Bray put him back down with a attack to the gut. Bray followed that up by DDT-ing Cena on the ring apron. Cena hopped off the top rope in an exciting moment where he landed on Luke Harper and Eric Rowan on the outside of the ring. Bray then threw Cena into the steel ring steps and then attempted to hit him with another set of steps. Cena fought back and brought Bray back into the ring, but Cena got put down with a stiff crossbody. Cena landed an Attitude Adjustment, but only got a two-count. Harper landed a stiff boot to Cena when the ref’s back was turned, which led Bray to lay over Cena with a Senton body splash. Cena tried to make Bray tap to the STF, but Bray fought out of it and hit his Sister Abigail finisher for the two-count. Bray retrieved a chair and challenged Cena to to him with it. Cena instead hit Rowan with the chair and finished off Cena with a final Attitude Adjustment.

The Undertaker vs. Brock Lesnar

Best Moments/Highlights: Once Brock and ‘Taker got going, Brock got the first big move in with a belly-to-belly suplex. He clotheslined ‘Taker over the top rope, but ‘Taker landed on his feet and shot Lesnar a death stare. Lesnar went to stuff his shoulders into a prone ‘Taker in the corner, but ‘Taker moved out of the way and started to assault Lesnar once again. ‘Taker landed his leg drop on Lesnar while he was laid across the ring apron. Lesnar soon regained the advantage and started to wear down ‘Taker’s leg by slamming it against the ring post and and dropping him on the outside of the ring. Lesnar went into a rampage and started going into several more suplexes in order to break ‘Taker down further. Lesnar used his MMM expertise to stuff ‘Taker with a slew of punches, but ‘Taker fought out of it with a big boot. ‘Taker seemingly got rejuvenated and hit his famous corner Snake Eyes/Big Boot/Leg Drop combination. ‘Taker Chokeslammed Lesnar but only managed to get a two-count. Once Lesnar got up, he dropped ‘Taker with an F5. ‘Taker survived that though and used his submission skills to lock Lesnar in a Hell’s Gate. Lesnar countered him with a Powerbomb on two different occasion after ‘Taker’s Hell’s Gate attempts. Lesnar soon got the chance to lock in his own submission with a Kimura Lock on ‘Taker afterwards. ‘Taker got his way out of that Kimura and locked on a Kimura of his own. Lesnar escaped by hitting ‘Taker with some punches to the kidney. Once ‘Taker got in position for Old School, Lesnar pulled him off the top rope and landed a second F5. ‘Taker survived, but was soon put back down with some vicious German Suplexes. ‘Taker got back into the fray with a Last Ride and Tombstone Piledriver. ‘Taker went for another Tombstone Piledriver, but Lesnar destroyed ‘Taker with a third and final F5.

Head to the next page for more WWE WrestleMania 30 results/highlights!