James Maslow and Peta Murgatroyd have had rumors swirling about a romantic relationship since day one on Dancing With the Stars this season. Here’s a look at the five reasons we think they should date (if they aren’t dating already).

1. They’ve Dated in the Past

Prior to Maslow going on tour, he dated Murgatroyd, but things didn’t go anywhere between the two of them because he left to go on tour. Much to Murgatroyd’s surprise, Maslow ended up being her dance partner on Dancing With the Stars and it was a very awkward first meeting. Have a look at how it all went down in the above video.

@jamesmaslow Hi! By the way…. You are dating with Peta Murgatroyd?? There are many rumors pic.twitter.com/GDBPqX92S5

2. Maslow’s Big Time Rush Crew Have Hinted at Their Dating

Maslow’s Big Time Rush co-stars decided to swing by the DWTS set and made some comments about Maslow and Murgatroyd dating. Maslow said nothing but did make some weird faces in response … You be the judge.

3. The DWTS Cast Have Pushed for Them to Date

The judges and the hosts of Dancing With the Stars have all made comments about the couple’s chemistry in their dances. Even co-host Erin Andrews has tried to get some answers on their relationship, but the couple has stayed quiet.

4. Murgatroyd Led Us to Believe There’s Something Going on Between the Two of Them on “Latin Night”

As Murgatroyd and Maslow prepared for their “Latin Night” routine on Dancing With the Stars, Murgatroyd was asked if she is dating her partner. Murgatroyd replied with, “All I want to say is that I look forward to coming here and seeing him every day.” Then Maslow said, “I’m not denying the fact that we like each other. She’s beautiful and cool, but we’re trying to keep it as platonic as possible right now.” The key words here are “right now.”

5. The Two of Them Make Up Team Jeta

Team Jeta is the name of Maslow and Murgatroyd’s duo on Dancing With the Stars this season. Have a look at the dancing duo in action in the below video.

@PetaMurgatroyd Hi Peta:). Do you think I'm quite ready to vote for you and James tonight :)? Please follow me:). pic.twitter.com/rRTkZjdwmq 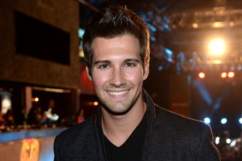 James Maslow on ‘DWTS’: 5 Fast Facts You Need to Know