Let’s celebrate with pictures and videos of the two together.

In the video above, we see Justin trying to get her to say “I Love You.”

2. Her Nickname is Jazzy

During an interview, Jazzy interrupts and wins over the audience.

When she was three, Bieber brought her on stage at his concert at Massey Hall in Toronto.

The crowd cheered after she impressed them with her vocal skills.

Last year, Justin tweeted the above message on her birthday. This year, he has yet to post, even though his fans are already celebrating the occasion on social media.

Bieber has two half-siblings, Jasmyn and Jaxon, through his father, Jeremy Bieber.

My @JazmynBieber u have taught me so much about myself and what i am capable of. You make me better … http://t.co/E1Z1HJEAHO 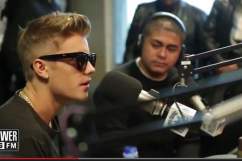