Solange Knowles is all over the news today after a surveillance video of a fight with Jay-Z was released to the public. Read on for the facts on the incident and more about Solange Knowles.

Solange Knowles got into a big fight with Jay-Z in an elevator at a Met Gala after-party at The Standard Hotel in New York City. Beyonce witnessed the whole incident, but seemed to not get involved.

Jesus Christ, @solangeknowles what the hell is your problem??? https://t.co/l4pzlIf3W0

Have a look at more of the crazy footage and read more about the altercation in the below link: 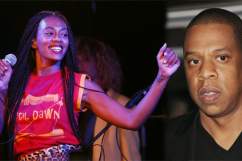 And now Jay Z has 100 problems

2. Her Son Was the Subject of an Illuminati Scandal

When Solange Knowles posted a photo of her 7-year-old son Julez throwing a rock star-like hand gesture, a Twitter user interpreted the sign as an allegiance to the Illuminati. Because of her attack on Jay-Z, Solange has been subject to Illuminati rumors once again. A gossip site Cream BMP posted that Solange “openly suffers from bipolar disorder” and blamed her attack on Jay-Z as “an initiation for joining the Illuminati.”

About a month ago, things seemed wonderful between the Knowles sisters as Solange joined Beyonce and Jay-Z at Coachella. Have a look at the two sisters up on stage together in the above video.

Generally, Solange does her own thing with her own music, keeping her career separate from sister Beyonce. Have a look at Solange’s popular music video for her song “Losing You” below:

4. There Was a Rumor That Solange Was Actually Beyonce’s Daughter

Y'ALL REMEMBER THAT RUMOR OF SOLANGE BEING BEYONCE'S DAUGHTER ON THE LOW THOUGH?

Back in 2011, there were rumors circulating that Solange was actually Beyonce’s daughter, not her sister. On one blog titled The Truth About Celebrities, it was written that:

Posted on a random message board, a former employer at Columbia Records has revealed that Solange Knowles is Beyonce’s biological daughter (not sister).

The same site posted the message board quote saying:

The shit i learned last week about solange being beyonce’s daughter and bee being a grandma! that takes the cake.

Clearly, this was just a rumor.

5. Solange Has Had High-Profile Feuds in the Past

@devhynes I have only ever praised you and spoken about you positively, even when our perspectives were totally different.

In the past Solange has been rumored to have spats with her own sister Beyonce as well as other music artists including Dev Hynes. Via Twitter, Hynes expressed his disdain for Solange, saying she had talked about him behind his back. Gig Wise writes:

Knowles denied any wrongdoing, claiming she’s only ever praised Hynes – but hinted he hadn’t been honest about the credit he took for working on her 2012 EP True, saying: “I still support your artistry & am extremely happy for your success. I just wished you were honest about the making of my album.” She also wished Hynes well, before saying “That’s all I’m going to say on this.”