The stars are aligned this summer as arguably the highest anticipated movie of the season, The Fault in Our Stars, graces theaters on June 6.

The movie, based on the YA bestselling novel, takes the lovable characters that John Green created and gives them life on screen.

Gus and Hazel, played by Ansel Elgort and Shailene Woodley, are living life to the fullest, even though they are both struggling teen cancer patients.

They meet in a support group, fall in love, and the rest makes literary and Hollywood history.

Let’s take a look at the movie that’s sure to warm and break our hearts.

1. The Author Cried on Set…a Lot

In the beginning, John Green, author of the novel the movie is based on, refused to adapt his work for Hollywood audiences. Afraid that it would be made too superficially, he went so far as to ask his publisher not to send out advanced copies to movie studios.

Director Josh Boone invited Green on set, and typically authors stay for one of two days.
This set was unique in that Green was there 80 percent of the time.

He even had a cameo, but it was cut from the film.

Seeing the characters and dialogue he created was an emotional experience for Green and he couldn’t hold back the tears on set.

Boone said, “John Green cries all the time. This set basically has no testosterone whatsoever.”

I cry a lot. In fact, it was a joke on the movie that I cried every day. But I cried every day because they were good every day! I got a lot of shit, because every time they called, ‘Cut!’ they would look over at me, and I would be crying.

Green, 36, who has written five books, got the inspiration for TFIOS after serving as a volunteer chaplain for young cancer patients in Chicago.

“I tried to write the funniest, most honest love story I could about these kids who were living with a difficult disease. I never thought it would be popular. I certainly never imagined it would be a movie,” he told Entertainment Weekly.

The book and highly anticipated movie have become so important that Time magazine awarded Green the honor of being one of the 100 most influential figures in 2014.

Woodley herself wrote the excerpt in the magazine to honor the author. She said:

He acknowledges the intelligence and vulnerability that stem from those beautiful years when we are, for the first time, discovering the world and ourselves outside of our familial stories. But he doesn’t just listen to young adults. He treats every human he meets as their own planet, rather than simply one of his moons.

2. Almost 200 Actresses Read for the Part of Hazel

Woodley was so determined to play Hazel after reading the book that she wrote Green a letter. The author was not very much affected. In fact, he told Vulture:

It was a very memorable email, but at the time, I didn’t know very much about Shailene, so my reply was very brief. I think it ended with like, ‘I’m not a casting agent.’

Boone wasn’t impressed with her enthusiasm either. He also felt that at 22, Woodley was too old to play a 16-year-old.

The Hollywood Reporter listed Hailee Steinfeld as one of the actresses in contention.

Finally he and the casting director traveled to Chicago to meet with Woodley, who was filming Divergent.

Her audition blew the director away and sealed the deal:

Within about two minutes, I knew it was going to be her. I was on the floor. I thought, ‘Why am I fighting this? There’s nobody better than her. She’s awesome.

Green was not in the room, but got the audition tape sent to him.

He said he was wary at first, but that sentiment quickly disappeared:

But I watched and it was perfect. It was Hazel. She sounded like Hazel. She had the cadence that I imagined in my head as I was writing Hazel, which seemed impossible to me.

In order to fully look the part, the long-locked Woodley had to cut her hair. In the video shown above, she sits in front of crew members, as her long tresses are cut into a bob.

The locks of hair were donated to Children With Hair Loss, which makes wigs for children experiencing medically-related hair loss.

3. The Cast Met With Teens Who Have Cancer

Nat Wolff plays Isaac, Gus’ best friend, and part of the support group that Hazel and Gus attend. His character goes blind and gets dumped at the same time.

To prepare for the role, Wolff met with someone with the exact same plight.

“And I met with a guy who actually had exactly the same thing happen to him. He helped me out a lot technically and emotionally,” he said.

He also went to UCLA cancer center and said that he had fun with them:

I went in there thinking about a lot of medical questions I could ask and not wanting to make them feel like they were being used, but they were so open. And then they just wanted to talk about music and movies like any other teenager…They were a bunch of really cool kids

Visited UCLA's cancer center. Met so many amazing people. We wanna make sure fault in our stars honors them

Woodley said that some of the teenagers she spent time with later passed away:

While filming, I met so many young people who either had someone close to them die of cancer or who had a tumor in their head and were so excited to meet me, then passed away a few weeks later. That experience was the biggest wake-up call I’ve ever had.

Green also felt like he learned a lot from the patients he was with.

One of the best things that’s come out of this book for me is that I’ve become friends with lots of kids who are living with cancer. They’re awesome and fun to talk to and hang out with. They have an interesting perspective on adolescence.

The film was shot in Pittsburgh and Amsterdam for just $12 million. By mega-blockbuster standards, this is a small budget.

Green said, “Just about everyone involved with TFIOS was willing to cut their fee to keep the film within its bare-bones $12 million budget and preserve the story’s integrity.”

The producers of the project are Wyck Godfrey and Marty Bowen, the same people behind The Twilight Saga.
Scott Neustadter and Michael H. Weber wrote the script. They also penned the screenplay for The Spectacular Now, which also starred Woodley.

5. Real Cancer Survivors Were Cast in the Support-Group Scene

In the above video, from the set of TFIOS, John Green introduces the group above as real-life cancer survivors.

I want to thank them all for being part of the movie and also for sharing their experiences with us. It’s just been awesome to hang out with them.

There was a casting call printed in the Pittsburgh Post-Gazette in 2013:

The Fault in Our Stars, shooting in Pittsburgh in late summer and early fall, is looking for teens and young adults, ages 13 to 23, who have been affected by cancer to appear as extras…These are paid but non-speaking roles and no experience is necessary. Those interested will be needed for roughly two to five days of filming in September. 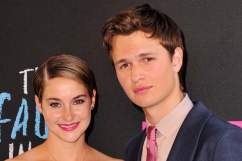