Here’s what you need to know about the lovebirds.

We’re all crossing our fingers that TLC captured every last moment of the Schmucker wedding on tape, because from the pictures, it looks like it was a blast. Starcasm fortunately reported that TLC most likely did show up at the Schmucker wedding, meaning there could be a fun episode in our future full of bonnets, lace, and a ton of wedding drama.

Check out some great photos from their wedding here.

2. They Didn’t Get Married In a Chapel

#ReturnToAmish wow! Chapel if you say you won't push Andrew away this time…say yes! #SayYes

I guess this isn’t too surprising considering Chapel’s background, but it assuredly set Mary off. In last week’s episode, Jeremiah approached Mary about a business deal that would help her make some money, and on Sunday night’s episode, Mary entertained the theory by selling some hats at a Groundhog’s Day Festival. Maybe she’ll be too distracted by the emerging business to be overly concerned with her son’s not-Amish wife.

Well, alright, we’re not too sure if the page is legitimately run by Andrew and Chapel, but there’s a ton of great (wedding) photos of the two of them on it. Seems like the two were finally able to put Andrew’s troubling past aside to tie the knot. The wedding photo’s caption reads:

4. Chapel’s Cancer Is Back

On Sunday night’s episode of Return to Amish, Chapel finds out her cancer is back. Andrew—shocked—doesn’t know what to say, and simply responds with a “Wow.” He admits he’s scared, both for Chapel and her children. But Andrew reassures her that he’s gonna be there no matter what happens.

Chapel was diagnosed with bone cancer in late 2011, and has since spent time searching for ways to raise money for her operations. In September of last year, Chapel shared her story with YouCaring.com, a digital fundraising campaign, in order to help pay for medical procedures. On her YouCaring.com page, Chapel wrote:

Unfortunately, she was only able to raise $55 of her $1,000 goal, and her campaign on the site ended 6 months ago.

5. Rebecca Feels for Chapel Despite Their Complicated Past

The whole drama around Rebecca and Andrew is confusing. In the preview clip that was released before the show started, Chapel asks Rebecca if the two slept together and she responds by saying “It started but we didn’t actually sleep together.” Last summer, the Huffington Post chronicled the drama between Andrew and Rebecca. During the reunion of Breaking Amish: Brave New World, Andrew finally admitted that he slept with Rebecca, before her and Abe got together. He says they had both been drinking that night.

On Sunday night’s episode, Rebecca was completely heartbroken over the news that Chapel’s cancer came back. She couldn’t hold tears back as she told Chapel she couldn’t stand the thought of her dying. Chapel admitted that sometimes the hardest part of having cancer was seeing how it affected everyone around you. 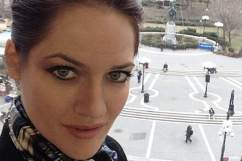 Read More
5 Fast Facts, Breaking News
Andrew told his family about his intentions to propose to Chapel on Sunday night's episode of 'Return to Amish', and Chapel found out bad news about her health.