The Sun reported that 70-year-old Mick Jagger is dating a 27-year-old only three months after the death of his girlfriend, L’Wren Scott.

They were photographed on the balcony at Dolder Grand Hotel in Zurich in early June.

Here’s what you need to know about Melanie Hamrick.

Hamrick has been a dancer with the prestigious American Ballet Theatre in New York City since she was 17.

She told FLX about her favorite parts to perform on stage:

I really loved dancing Olympia in Lady of the Camillias. I loved the acting part of it and that I could develop the character and become that person. Also I loved dancing Calliope in Apollo. That was the opposite it is more technical and stylized and less of an acting character.

According to her bio page on her ballet company’s site, she was born in Williamsburg, Virginia.

She now lives on the Upper West Side of Manhattan, the same neighborhood as Lincoln Center, where ABT performs.

Jagger was introduced to his new girlfriend during a trip to Tokyo.
The Rolling Stones performed there on February 24, two weeks before Scott’s suicide.

According to the Daily Mail, Hamrick’s ballet troupe got backstage access to the concert, and that’s where the pair met and exchanged contact information.

A source told the Sun, “After her death, Melanie reached out and they met in New York as friends.”

The source continued, “He invited her to Zurich to see the Stones and that’s when things became intimate between them.”

5. She Was Recently Engaged

In May of 2011, she got engaged to fellow ABT dancer José Mañuel Carreño. They dated for six years.

Congrats to @ABTBallet's Jose Carreño & Melanie Hamrick, newly engaged–& to @HEESEOABT for this photo of the ring! http://bit.ly/laxkel

At some point next year he will also squeeze in his long-ago announced marriage to fellow ABT dancer Melanie Hamrick, who appeared with him in the 2011 gala performance in Sarasota last August. 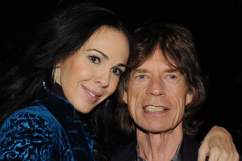