Season Premiere tonight on @TLC at 9/8c! We are so excited for this season of the @NextNGB ! #TVshow #NextGreatBaker pic.twitter.com/1BNakFQLI3

Tonight is the premiere for season 4 of reality competition Next Great Baker and we’ve got a whole new bunch of bakers ready to fight for the title. Check them out one by one in the below introduction videos. 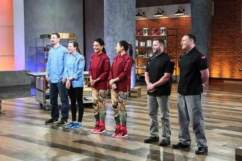 Al & Lia are co-workers who are ready to prove hard work pays off. Meet #BlueNGB: http://t.co/ysR04miPMP

Ginger is Brandy's mentor, and together they feel confident they can take on the competition! Meet #GrayNGB: http://t.co/3zG5jEsZCv

Jose is a party boy. Aimee is a pastor's wife. Could this odd couple make a winning recipe? Meet #BrownNGB: http://t.co/ioO2MDagup

Kai & Rox are ready to add some fire to the competition, and look good doing it. Meet #MaroonNGB http://t.co/RrzMdsKCK2

Fred & Barry are two pastry chefs from Vegas ready to go all in on the competition! Meet #TealNGB: http://t.co/tNLmipRiRR

David and Elaine are a spicy latin couple from Florida ready to add some flavor to this season! Meet #RedNGB: http://t.co/zx2eHuuZCT

Danielle & Julie are a sweet Southern mother/daughter team! Will they bake their way into your hearts? Meet #PinkNGB: http://t.co/nzxwrZDa7y

Don & Meredith are tough New Yorkers who don't mess around when it comes to cakes! Meet #TanNGB: http://t.co/axRwBnnDdW

Read More
Cooking, Reality TV
The Next Great Baker reality competition returns for it's fourth season tonight and we've got all the info on the new bakers. Check it out.