Adam Richman posted a photo of himself on Instagram and unknowingly used a pro-eating disorder hashtag “Thinspiration” along with it. When fans and followers made him aware of this, he became angry and lashed out with the above comments. Since his outbursts, Richman has posted apologies and his Instagram photos are now private.

As a result of Richman’s harsh comments online, the Travel Channel has pulled the plug on his show Man Finds Food, which was supposed to premiere this week. On Richman’s Instagram page, his byline reads:

I make fun TV, I eat great food, I write swell books, I make sweet love, I give great hugs, I take no crap, I love my life, my fans, and my Mom.

Perhaps he’ll rethink the “I take no crap part.”

Richman has such a huge fan-base, so many are hoping he can overcome this horrible incident and learn from it to move forward. 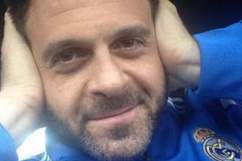 2. Richman Gained Notoriety From His Famous Show Man Vs. Food

Man Vs. Food is a fantastic show where Richman travels all over the United States, taking on food challenges, touring local eateries, and taking on some of the biggest plates you’ve ever seen. Eventually, the show had a spin-off called Man Vs. Food Nation, where Richman other patrons would join Richman in his food challenges. Travel Channel’s website describes the show as this:

Man v. Food Nation is the evolution of Man v. Food. Adam Richman has scoured the country, competing in America’s most compelling food challenges. He’s fought, he’s conquered, and he’s been conquered. After 3 years of eating his way across America, Adam’s heard the Man v. Food Nation …they want a piece of the action. Now, Adam is recruiting local talent to take on their beloved hometown challenges.

Since Richman’s time on Man Vs. Food, he has successfully lost over 70 pounds.

4. Richman Started Out as an Actor

Oh my Butcher God, it's @AdamRichman on Joan of Arcadia!! Well, hello there, cutie. pic.twitter.com/zyagVpkRH2

After getting a master’s degree from Yale School of Drama, Adam Richman ventured into the art of acting and actually appeared on several prominent shows like Law & Order, Guiding Light, and All My Children.

Adam Richmans Fandemonium S01EP06 – Horsing Around – Kentucky StyleSeason 1 Episode 6 Full Episode Details: Adam returns to Louisville, KY, for the 139th running of the Kentucky Derby, and he gets the chance to experience it like never before. The fans have turned this historic 2-minute race into a weeklong, citywide celebration complete with raucous parties, tasty and inventive foods and, of course,…2013-09-25T00:34:23.000Z

Adam Richman has been a part of so many food shows since he began Man V. Food. Currently, he’s the host of Adam Richman’s Fandemonium, where he pursues his craziest super fans and culinary creations. Check out a full episode of the show in the above video.

Read More
Adam Richman, Celebrities, Isntagram, Reality TV, TV, Twitter
Read on for the facts on Adam Richman, his new shows, and why he's been in the spotlight so much lately.