Let’s get to know Brielle Biermann, Kim Zolciak’s daughter. We first got to know her as a little girl on Real Housewives of Atlanta, but the years have passed and Brielle’s growing up. Read on for the facts on Brielle’s dad, her love life, and more.

1. Brielle’s Father Is Tough to Track Down

Kim Zolciak’s husband Kroy has legally adopted both of Kim’s daughters – Brielle and Ariana. The two girls have different fathers but consider Kroy to be their dad. Brielle even changed all her social media accounts to “Brielle Biermann.” So, who is the biological father of Brielle? According to Lipstick Alley:

Brielle’s father is the 49 year old married cop she was fucking when she was 17 (or 16). No one at his job found out about it until she was 19 years old. This man is her real father.

Lipstick Alley has multiple reports about Brielle’s father, one naming him as John MacDougald, while another person says his name is actually Tom. Most reports are about Kim’s other daughter’s father Daniel Toce, who is reported to be a sociopath and rapist. 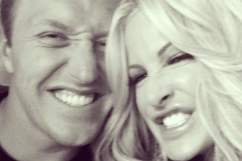 From the reality show Chrisley Knows Best, Chase Chrisley has been romantically linked to Brielle over the past few months. There have been some flirty tweets (pictured above) and fans wasted no time in shipping the two reality stars.

“@ChrisleyChase: I just wanna be with brielle right now”

3. She Has Totaled Three of Her Family’s Cars

On the premiere episode of Don’t Be Tardy this season, Brielle wants to borrow the family’s Range Rover. Kim and husband Kroy tell her that she can only drive her Honda because she’s totaled three cars already. Brielle claims she’s embarrassed driving the Honda to school and Kim tells her she’s lucky to have a car at all.

According to Kim Zolciak’s blog:

Brielle actually does still drive the Honda, but she also drives her Range Rover too. We are easing her back into it!

4. Brielle Wants to Be a Victoria’s Secret Model

At one point, Brielle told her mother that she wants to entertain as a career. She wants to play guitar, sing, act, and model for Victoria’s Secret.

As far as Brielle’s modeling career thus far, she modeled during the 2013 New York Fashion Week at the Michael Kuluva show.

seriously, i love my boyfriend.

Scott Simons is the name of Brielle’s last known boyfriend. Last year, she dated the Georgia resident for what appeared to be several months, but recently, Brielle’s been posting a lot of photos on Instagram with a new boy. Check out some of the pics of Slade Osborne below: