The amateur cooks have not completely been revealed yet, but the names we know so far are Elisha Joyce and Lake Oswego.

So, how does the show work? Pop Tower gives the run-down:

Armed only with recipes for their best signature dishes, and three culinary “lifelines” afforded each cook, they’ll square off against an expert chef who will have to cook the same dish. The completed dishes will then be sampled in a blind taste test by an esteemed panel of culinary judges known as “The Dinner Party.” After the two competing dishes are tested, the verdict determining the winner is given to the host.

If the professional chef wins, it’s the end of the line for the amateur cook. But, if the cook wins, then they continue to battle for more and more prize money. 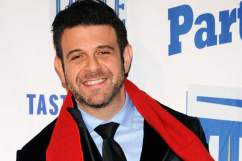