@Teresa_Giudice I love this photo of Mr. Giudice. It's with you, your mom and Filomena. He had a great smile! pic.twitter.com/4CM9O23fZU

As if Joe Giudice and his family hasn’t been through enough over the past couple of years, Joe’s father Frank passed away on June 18, 2014. Let’s have a look back at Frank’s time with his family, his moments on the Real Housewives of New Jersey, and his sad passing.

1. Granddaughter Gia Was Devastated by the Loss of Her Grandfather

strongest man I know.. I love you nonno❤️rest in peace 6/18/14 pic.twitter.com/Fwsasr8M3C

When Frank Giudice’s tragic death happened, granddaughter Gia seemed to take it very hard and posted several tweets about losing her Nonno Franco. Have a look at the sad tweets.

the pain inside my heart is unreal..

this is gong to be the hardest day of my life..

In addition to Gia, Frank Giudice is survived by ten other granddaughters. Have a look at the amazing Twit pic below:

My Fatherinlaw & Motherinlaw and their 11 granddaughters. pic.twitter.com/uSQzmmp9EC

2. His Unexpected Passing Occurred at the Home of Joe and Teresa Giudice

Thinking of u @Teresa_Giudice❤️ I found this while searching ur recipes in Fabulicious ❤️ pic.twitter.com/GKSArV1Tbv

Reportedly, Frank, 63, and son Joe had been at Joe’s house in the backyard playing with their dog, Simba, when Frank collapsed. At first, the cause of death was unknown, but was later said to be a heart attack. Teresa wasn’t home at the time of the incident, but came home shortly after. By the time paramedics arrived, it was too late.

Frank is survived by his wife, Filomena Giudice. Have a look at their beautiful photo together in the below Twit pic.

Mr. And Mrs. Franco Giudice who were married in 1969. Enjoy! They are so cute! @Teresa_Giudice Xo pic.twitter.com/WHcJSE696G

3. Frank Is Featured on This Season’s Real Housewives of New Jersey Premiere

In the premiere episode of the RHONJ on Sunday, July 13, 2014, we see a nice moment between Frank and his son Joe. The Star Ledger writes:

In a poignant moment in the season six premiere this Sunday of Real Housewives of New Jersey, Giudice family patriarch Frank, who passed away suddenly last month, shares a tender hug with his son Joe Giudice, daughter-in-law Teresa and granddaughter Gia over the family’s ongoing legal problems, and vows to support them.

This episode was filmed prior to Joe and Teresa Giudice pleading guilty to their charges. After son Joe makes a toast to his family about how much their support has meant to them and how they all love each other so much, dad Frank is sure to tell Joe, “I’ll be there all the time.” Unfortunately, Frank couldn’t keep his promise.

Our hearts go out to the Giudices. After Frank’s death, Joe and Teresa Giudice’s court date for their sentencing was pushed from July to September 2014. The Inquisitr writes:

Teresa and Joe’s July court date was moved to September after the sudden death of Joe’s father, Frank Giudice. They have a couple of short months left before they find out their fate. Both Teresa and Joe face prison after pleading guilty to several federal fraud charges brought against them.

4. Fellow Housewives Stars Have Rallied Around the Giudice Family

Please Join me in sending Love & Prayers to the Giudice Family…

When Frank’s passing occurred, many showed compassion for Teresa and Joe, as they’ve had so many troubles between their fraud charges, bankruptcy, and now this. Sister-in-law and Housewives star Melissa Gorga reported to The Star Ledger on how Teresa and Joe are coping with their loss:

They’re thinking positive and looking at it like they now have an angel.

Other Housewives stars showed their support to the Giudice family on Twitter.

I was so sad 2hear about the loss of Joe Giudice's Dad 2day.He was a man w/a great sense of humor&I know how much he was loved by his family

5. Teresa Giudice Has Thanked Fans And Friends For Their Support

Thank you all for your prayers…xx

During the rough time, Teresa reached out via Twitter to thank her fans, family, and cast members for their support. Even a few of the new Housewives on the show posted their sympathies.

My prayers and condolences go out today to the Giudice family …

My heart felt condolences go to @Teresa_Giudice /family. “Love beyond the world c/n be separated by it. Death c/n kill what never dies.” 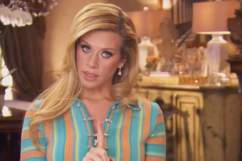