Based on the bestselling novel by Gillian Flynn, the story follows a woman who goes missing on the day of her fifth wedding anniversary. Her husband becomes the lead suspect in her disappearance.

Ben Affleck and Rosamund Pike star as the couple in the movie adaptation, out on October 3.

Here’s what we know about the film so far.

1. A Virtually Unknown Leading Lady Beat Out A Listers

Because of the book’s fan base, director David Fincher had the daunting task of casting the perfect Amy.

Although names like Reese Witherspoon, Charlize Theron, and Gwyneth Paltrow were being thrown around, Pike came out of obscurity and got the coveted role.

Fincher interviewed the actress via Skype, since she was in Scotland in the midst of another job at the time.

“I liked that people didn’t immediately know who Rosamund was,” he told W magazine. “I’d always liked Rosamund in movies, but I didn’t really know her. That made her very interesting.”

2. The Scantily Clad Model from the ‘Blurred Lines’ Video Stars

Emily Ratajkowski, the model who danced around Robin Thicke in the “Blurred Lines” video, was cast as Affleck’s mistress, Andie.

Fincher saw her in the video and asked her to come on board.

Andie is a college student who Affleck’s character, Nick Dunne, has an affair with at the same time his wife goes missing.

Woke up to an insane response from everyone about 'Gone Girl'. So appreciate the support and excitement!

This is Witherspoon’s second run as a producer, her first in 2006’s Penelope.

The actress-turned-producer is excited about the new project and
told E News:

It’s great to collaborate when people are so talented. I’m just thrilled that the movie is getting made so quickly…and this author Gillian Flynn, who is so talented, is having so much of her work produced now.

4. The Book’s Author Wrote the Screenplay

In an interview with ABC, she was asked if the ending was different from the original.

She said, “I cannot give away … the ending of the movie. I wrote the screenplay, so it was in good hands.”

The author did confess to EW that the ending was a bit of a shocker. It even surprised Affleck.

Flynn told the magazine, “Ben was so shocked by it. He would say, ‘This is a whole new third act! She literally threw that third act out and started from scratch.'”

5. NPH Plays the Ex & Dished on His Sex Scene

He told Out magazine about the precision that went into his sex scene:

We had to rehearse the sex scene with David, like every inch of it — ‘Then you put your mouth on his d**k here, and then this number of thrusts, and then you ejaculate. It was weird because we’re technically breaking down the sex scene. He wanted it to be almost robotic, that we know exactly where we are, position-wise, where everything goes. And yet, through all of that, the whole ‘I’m gay’ element was never even thought about. 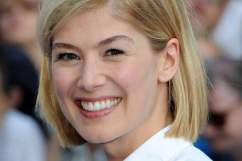