Judy Greer is done with playing the best friend … at least for now. The 38-year-old actress, whom you may recognize from The Descendants or romcom classics like 13 Going on 30, will star alongside Nat Faxon in FX’s new series, Married, which premieres Thursday night, July 17, at 10 pm.

Here’s what you need to know about the talented woman who’s finally taking center stage.

Greer’s book, I Don’t Know What You Know Me From , revolves around the many best-friend roles she’s been cast as in her career.

Earlier this year, she talked to The Washington Post about her book, and explained that one of the perks of playing the friend is that people can’t always place her.

It always comes in handy, definitely. It’s kind of the best of both worlds — I get to have a great career and play great roles and work with great people, and I can go to Target whenever I want.

In one chapter, “I Used to Be More Ugly”, Greer claims that her awkward years forced her to rely on her personality. She also admitted that if she had to cast her own best friend in a movie, she’d pick Angelina Jolie.

Some of Greer’s most renowned credits include: Three Kings, What Women Want, The Wedding Planner, Adaptation, Arrested Development, 13 Going On 30, The Village, and Carrie.

Greer spoke to Scholastic about her web series, Reluctantly Healthy, which teaches busy women how to stay fit while on-the-go. She travels from groceries stores to doctor offices for the series, and informs her audience (mainly mothers) how to maintain a healthy diet and lifestyle.

Each webisode is no longer than five minutes. Greer told Fitness Magazine,

I had a lot of questions myself on how to stay healthy on the road and I figured other people are just as curious. I’m lucky enough to have access to people who can answer these questions and doing it on a platform that reaches 26 million viewers is a good way to get the information out there!

You can watch webisodes here.

3. She’s Married to An Executive Producer of ‘Real Time with Bill Maher’

Greer met Dean Johnsen on a blind date in 2010, and he popped the question a year later while the two were vacationing in Napa, California. Marrying the Maher exec producer meant Greer had to walk into the role of step-mom to her husband’s teenage children. She told Metro:

My stepkids are so old now, I’m almost done. Except now it gets really expensive because they’re going to college. People say; ‘You have it so easy, your kids are older.’ But the stuff I have to deal with now is so major – college, sex, grades and sports.

Greer and Johnsen were married in front of 200 guests at the Los Angeles Athletic Club, and the wedding was attended by stars like Jason Biggs, Sarah Chalke, Rashida Jones, and Bill Maher.

4. She Plays Chimp Cornelia in ‘Dawn of the Planet of the Apes’

Not only did Greer play a female chimp in Dawn of the Planet of the Apes, but she’s been cast in the film Jurassic World, which will premiere in June 2015.

Greer’s husband is a huge Apes fan. Their wedding in 2011 was Apes themed and they had a chimp bride and groom cake topper. After watching Rise of the Planet of the Apes in 2011, Johnsen told her she had to get a role in the sequel.

Greer recently dished to Vulture about their Apes-themed wedding:

At the cocktail hour, we played Planet of the Apes and Rise of the Planet of the Apes on two separate televisions in the bar area. And on the wedding gift I bought him, a vintage Rolex, I had it engraved, ‘Ape shall not kill ape.’ I was then told that, technically, it’s ‘Ape shall never kill ape,’ but there wasn’t enough space for engraving purposes.

The New York Post reports that Kerry Russel was the only female cast when Greer asked to play an ape in the film. She said that while learning the physical movements was very tough, she was happy not to have to go through hair and makeup each day.

5. Her First Roommate In LA Was ‘Kirk’ from Gilmore Girls

Sean Gunn, who is best known for his role as Kirk in Gilmore Girls, was Greer’s friend and classmate at DePaul and eventually her first roommate in LA.

Greer will be playing the role of Lina Bowman in Thursday’s premiere of Married on FX. The show aims to realistically mirror married life, and stars comedians Jenny Slate and Brett Gelman. Nat Faxon, who plays Greer’s husband in the show, admits that playing her husband is frighteningly easy. He told zap2it,

She’s so good, she’s such a very natural performer, and that makes things very easy because you just kind of slide right into it without having to have a lot of time together to create something that doesn’t exist. It’s been not a ton of work as far as us bickering at each other and loving each other and hanging out with each other.

Married has received overwhelmingly positive reviews so far. It airs Thursday on FX at 10 pm. 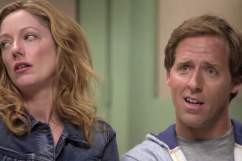 ‘Married’ on FX: 5 Fast Facts You Need to Know