Weird Al Yankovic’s latest album “Mandatory Fun” is finally here and we’ve got all the info on it for you. Check out the run-down on the music videos being released, the track list, where to listen to the album, and more.

1. This May Be Al’s Last Album

Fans are hoping that it isn’t true, but this could be Weird Al’s last album. This would be very sad news as Weird Al has been the king of parody for over 30 years. Perhaps a possible retirement could be because of the challenges with YouTube. Weird Al opened up to NPR about the obstacles that come along with social media.

When I do my parodies, because of YouTube, I’m never the first person to do a parody of a certain song. And all the obvious ideas seem to be taken already, so nowadays when I do a parody I try to think of an angle that might be a little bit different or left-of-center that somebody else hasn’t thought of already.

I did have the field to myself pretty much throughout the 80s and 90s, and it’s more of a challenge now because I have to make sure my material rises above on its own merits. I can’t just say “Well, I’m the only person with a major label recording deal.” Now I have to compete with the thousands and thousands of people that are also putting out comedic songs and parodies.

Weird Al then confirmed what we were all in fear of … he talked about the fact that this may very well be his last album, saying:

I wanted to really do what is ostensibly my last album with a big splash. I wanted the first week to be big; I wanted every single day of release week to be an event. I wanted a video to go viral for an entire day and have people talking about that video, and then the next day they’re talking about a new video. I just thought that would be a really fun way to do it, to make a big deal out of release week.

The track list for the album is filled with delightfully crazy songs like “Lame Claim To Fame.” And, while many Weird Al fans know this, there is always a polka song on every Weird Al album. This time, it’s called “NOW That’s What I Call Polka!.”

To kick things off for the new album, Weird Al released his video “Tacky” yesterday, which is a parody of Pharrell Williams’ hit song “Happy.” Aisha Tyler, Margaret Cho, Eric Stonestreet, Jack Black and Kristen Schaal all dressed in “tacky” outfits and joined in the fun.

Weird Al will be releasing 8 music videos on his website through July 21, 2014.

4. This Album Is Full of Parodies 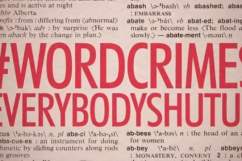 Weird Al Yankovic is, of course, the parody king and his new album is full of awesome ones. In addition to “Tacky,” Weird Al has parodied Robin Thicke’s “Blurred Lines” with his new song “Word Crimes.” Plus, instead of “Radioactive,” Weird Al has written the song “Inactive” and he’s got a Lorde parody called “Foil,” along with a parody of Iggy Azalea’s “Fancy” called “Handy.”

5. What the Album Name Means to Al

Weird Al was asked by NPR why he chose the title “Mandatory Fun” and he said:

That was just an oxymoron that I’ve always been amused by. It’s used a lot in corporate retreats and, I’m told, in the military. Also, this is the last album of a 32-year-long record contract, so some fans have theorized that that might have something to do with it as well, but I can’t really comment on that.