Alfonso Ribeiro is competing on Dancing With the Stars for the show’s 19th season. Check out all the facts on Alfonso below:

1. Carlton Banks From Fresh Prince of Bel-Air Is His Most Famous Character

Alfonso Ribeiro is most known as Carlton Banks, the spoiled rich cousin of Will Smith on Fresh Prince of Bel-Air. Carlton was known for bursting into song and passionately dancing to 70s, 80s, and 90s hits. Check out his best moments in the above hit.

2. Witney Carson Is His Dance Partner on Dancing With The Stars

Witney Carson has been paired with Drew Carey and Cody Simpson in the past, but this season, she’s paired with Alfonso. 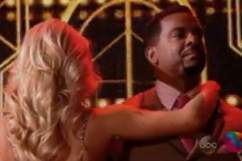 WATCH: Alfonso Ribeiro Kills It With Best ‘Dancing With the Stars’ Performance of the Night

Currently, Alfonso is married to Angela Unkrich, who he married in 2012. He was previously married to Robin Stapler 2002 until 2006. Alfonso married writer Angela Unkrich on October 13, 2012 and they currently live in Los Angeles with their baby son named Alfonso Lincoln Ribeiro, Jr. Alfonso was also previously married to Robin Stapler, but they divorced, citing irreconcilable differences. They share joint custody of their daughter Sienna Ribeiro.

4. Alfonso’s Been Victim of a Death Hoax

Many celebrities have been victim of death hoaxes and Alfonso is no different. After Alfonso appeared in Michael Jackson’s Pepsi commercial, a rumor was spread that Ribeiro had died from snapping his neck while dancing for the commercial. Clearly, this never happened.

5. He Starred In the Broadway Musical “The Tap Dance Kid”

Alfonso had the lead role in the Broadway musical “The Tap Dance Kid,” and appeared as a dancer in one of Michael Jackson’s famous Pepsi commercial.