Jessie Pavelka is one of the new cast members on season 16 of The Biggest Loser. Check out all the facts on the sexy new trainer …

1. Jessie Pavelka Joins the Cast of Other Trainers on Biggest Loser

Pavelka joins the other new trainer Jennifer Widerstrom, along with the two veterans Dolvett Quince and Bob Harper on The Biggest Loser this season. Twenty former athletes are coming on the show for an incredible weight-loss journey to return to their “glory days.” Check out an interview with Pavelka and Widerstrom above. 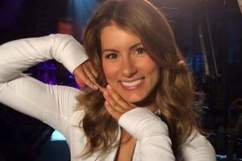 2. Actress Sitara Hewitt Is His Wife

WOW! I'm my favorite supplement company's new Spokesperson. I use it, & it's transformed my health. @NaturalCalmCa pic.twitter.com/VA7ThZIQMH

Sitara Hewitt is a Canadian actress who is the wife of Jessie Pavelka. For her career and husband, she splits her time between Toronto and Los Angeles. Her upbringing was very unique, as she spent about four years in Pakistan’s Himalayan mountains. Hewitt spent time in the Hunza Valley of Gilgit-Baltistan because her parents were doing academic field research there. Due to her well-rounded upbringing, Hewitt is fluent in both Urdu and English and semi-fluent in Balti.

Hewitt and Pavelka have a son named Rowan together. You can see his picture in the below Twit pic:

Carrying your son during a hike is a great way to burn extra #calories…and throw out your back…Time to walk dude! pic.twitter.com/VwhUIy57Is

@SitaraHewitt thanks for all you do to make it possible for me to do what I do. Rowan is a lucky boy.

3. This Isn’t Pavelka’s First Time on a Fitness Show

Prior to becoming a trainer on The Biggest Loser, Pavelka was a presenter for the shows Obese: A Year to Save My Life, DietTribe, and Fat: The Fight of My Life on Sky Living HD. Originally, Pavelka didn’t want to do reality television, but eventually come to the conclusion that he could make a big impact on viewers.

In addition to fitness TV, Pavelka has acted on a couple shows including Rita Rocks and The Rise and Fall of Tuck Johnson. TV runs in Pavelka’s family as his cousin is Bachelor star Jake Pavelka.

Pavelka attended the University of North Texas for football, but got turned onto fitness. He told UNT:

UNT was such a big part of my life. I played football when I first got there but I decided to quit. The experience of leaving behind something I’d done for so long was life changing. I was left with this space I had to fill. But it allowed me to put more effort into fitness and health and learning more about that. It was a turning point for me.

5. He Started Out in Los Angeles Modeling for Fitness Magazines

Before Pavelka moved from Texas to Los Angeles, he began flying out to LA for fitness magazine shoots and jobs like that. Pavelka told UNT:

I started doing shoots in LA for fitness magazines and things, but I was still in Texas and had to fly out to do them. Finally I decided on July 7, 2007, to move to LA to pursue a career, not only with fitness but also to see if I could do the acting and modeling thing.

Eventually, his agent recommended that he audition for the show DietTribe and the rest is history.

Read More
Fitness, Reality TV, The Biggest Loser, TV
Jessie Pavelka is one of the new trainers, along with Jennifer Widerstrom, on "The Biggest Loser." Read on for the facts on Pavelka, his life, and his wife.