Janel Parrish used her Pretty Little Liars fan base for her Halloween performance on tonight’s Dancing With The Stars. Val Chmerkovskiy and Parrish danced to the PLL theme song and Parrish was very excited to “kill Val” at the end of the routine. Judge Julianne Hough had some critiques on the routine, but said the performance was great. Carrie Ann Inaba thought Parrish’s fluidity throughout the dance was wonderful, while Bruno Tonioli and Hough want her to follow through with her movements more.

As for Parrish’s scores, she received a total score of 31 out of 40. 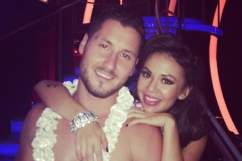