The kids’ belt company, Myself Belts, entered the Shark Tank on October 31.

1. It Started With Potty Training

The company actually started when Goldfarb was potting training her then 2-year-old son.

“I struggled to find a solution because the belts with buckles just didn’t work with his small hands, and he wanted to be independent after having mastered potty training. Also, he needed something that could be quickly undone at a moment’s notice,” she explained.

It was then that she realized that there were no belts geared towards children on the market at that time.

It was her sister, Danielle who suggested that they should do something about the lack of product.

Although the women lived on different coasts, they made it work, and the company was started in 2004.

Goldfarb saw the benefits of having her sister involved in the start-up process.

“We brought different styles, skills, and ideas to the venture,” she said.

At this point, Danielle’s focus has shifted to her family and life on the East Coast, so she now holds a minor ownership role.

3. Celeb Kids Use Them

“Sarah Jessica Parker called us after we sent her a belt when we launched thanking us for the cute firetruck belt. It was an exciting moment for us that I remember vividly even though it was probably 9 years ago,” Goldfarb said.

In March, she sent a video application to the show and the casting director called her just a few days later. On the show, she appeared with little Tegan, a friend from L.A.

When asked about her experience facing the sharks, she said:

I was definitely nervous throughout the whole process, but when I was actually in the tank I was pretty calm. The whole thing was so surreal that maybe my brain hadn’t caught up that I wasn’t practicing anymore and this was the real thing! It will be wild to see it and see if the way my brain remembers it, is what actually happened. 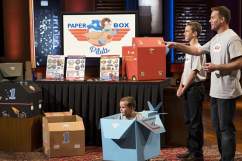 Since its has a patented one-handed belt closure, it enables children to fasten their belts by themselves.

“Our easy to use belts are perfect for potty training toddlers, preschoolers, school uniforms, and teens and adults with hand dexterity challenges stemming from physical or cognitive challenges,” Goldfarb said.