Taylor Swift is one of the most successful pop stars on the planet, with an estimated net worth of $200 million. Though she’s currently reported as single, she’s dated some of the biggest hotties including Harry Styles, Joe Jonas, Jake Gyllenhaal, and John Mayer. This week is huge for her with a new album dropped, TV appearances, a big upcoming concert on Good Morning America, and her new part on competition show The Voice. Read on for all the facts on Swift’s new music, her latest news, and what she brings to The Voice.

1. Expect a Ton of Jokes from Swift on The Voice

Swift is a goofy girl and that’s why her fans love her. In the above video, check out Swift as she jokes around on the set of The Voice and kids with contestants. Taylor Swift joins the show as an adviser to help out each team as they get ready for the “knockout rounds.” Previously, each coach had mentors who helped them out in rehearsals. Adam Levine had Stevie Nicks, Pharrell Williams had Alicia Keys, Gwen Stefani brought on husband Gavin Rossdale, and Blake Shelton used the guidance of country band Little Big Town.

Check out another funny clip from the show below, where Swift talks about her cats and Blake Shelton tries to stay relevant in her conversation.

“1989” is the name of Swift’s latest album, which dropped today. And, in case you’re wondering, the guy photo-bombing Swift in the above Instagram pic is her dad Scott Kingsley Swift. The album is named after Swift’s birth year and is influenced by big artists of that year. Some of the most acclaimed songs from the record thus far are, of course, “Shake It Off,” but also “Out of the Woods” and “Blank Space.” The deluxe edition of the album features the original 13 tracks plus three extra songs and three voice memos. The extra songs are “Wonderland”, “You Are In Love”, and “New Romantics”.

For all the info on the new album, check out the below link: 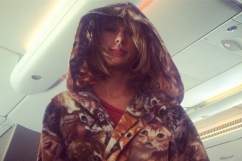 3. Recently, Swift Held “Secret Sessions” at her Houses and Invited her Fans

Taylor Swift has homes in Rhode Island, Los Angeles, New York, London, Nashville, and other places, all of which housed the “secret sessions” she held for 89 fans to celebrate her new album. Swift wanted to give fans the opportunity to hear the album before it came out and she wanted to see how they would receive her new music, so this was the perfect way to connect them. When Swift talked about the secret sessions on Good Morning America, she stated:

It was such a bonding experience. The coolest thing is these fans heard the album a month ahead of time and then didn’t leak anything. They didn’t tell any secrets. It was so amazing.

As far as the exact details of Swift’s living spaces go: Swift lives between a duplex penthouse in Tribeca, New York City, a three-bedroom cottage in Beverly Hills, California and a duplex penthouse in Midtown Nashville, Tennessee. She owns an eight-bedroom summer home in coastal Watch Hill, Rhode Island. In addition, Swift purchased a four-bedroom mansion in Belle Meade, Tennessee for her parents. She owns a Dassault Falcon 900 private jet and an airport hangar at Nashville International Airport.

Taylor Swift will be performing on “Dick Clark’s New Year’s Rockin’ Eve” with Ryan Seacret for the 2015 celebration at Times Square before the ball drops. Hear all about Swift’s plans in the above video as well as all the info she dishes on her fans and her new music.

Last Spring, Swift moved to New York City, though she has many homes in other areas, and Swift says that New York was a big influence for her music, paying tribute to the city with new song “Welcome to New York.” Swift told GMA host Robin Roberts:

New York was a huge landscape for what became this album and it’s affected my life in ways I am not even aware of yet fully. I’m still learning but I’m so enthusiastic about this city that I feel like when I love something, I’m very vocal about it. I just go around going like, ‘Everybody, New York is amazing.’ So I think they just picked up on that and they gave me, like, a title. 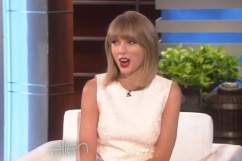 Read More
Celebrities, Music, Reality TV, Taylor Swift, The Voice, TV
Taylor Swift is taking the world by storm with new album "1989," her "secret sessions" with fans, and now her part as an adviser on The Voice.