On the Dancing With the Stars finale, judge Carrie Ann Inaba picked the jive for Alfonso Ribeiro. She even gave him a massage to help ease his back injury. Alfonso decided to rest a little before going full force into the dance routine. For his first performance, there was no sign of his back injury and he killed it with dance partner Witney Carson. The judges couldn’t get over how amazing Alfonso’s routine was and were raving about it, earning Alfonso a perfect score for his first routine. Check out the first dance above.

Will Smith has been a big supporter as a friend of Alfonso’s and posted his love on Facebook earlier today.

THE Will Smith took to his Facebook to wish @alfonso_ribeiro & @WitneyCarson good luck tonight on #DWTS! https://t.co/b2rXFEAHbP

For Alfonso’s second routine, he and partner Witney Carson wanted to combine moves from all of his dances throughout the season. He also added a tap routine from his past as a child in a Michael Jackson commercial. Alfonso even brought a little Fresh Prince action to the set. With another set of perfect 10’s, Alfonso and Witney finished with an absolutely perfect score for the night. Check it out below: 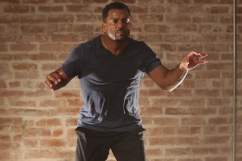 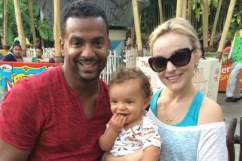