This season is the final one for Snooki & JWoww as we follow the two BFFs through the ups and downs of pregnancy. Nicole Polizzi and her best friend Jenni Farley are living next door to each other for the show and are both pregnant. JWoww is pregnant with her first child and Snooki is on her second. In addition, Snooki is planning her wedding, so things are pretty chaotic … but isn’t that why we love the show? Read on for all the facts on the dynamic duo, their babies, their men, and their friendship.

1. Their Focus Has Shifted from Parties to Babies

Meilani Alexandra Mathews, who was born on July 13, has starred in a series of shots shared by her proud mother. Jenni first introduced her baby girl to the world by posting photos of the darling brown-haired newborn on her Twitter and Instagram accounts on July 23.

When Meilani was first born, which we get to see happen on the final season of Snooki & JWoww, Farley and Roger Mathews’ rep released this statement:

Jenni and Roger are so excited to welcome the newest guidette Meilani Alexandra Mathews to the world. Meilani and her parents are doing great and are happy and healthy. Meilani is already looking to trade her baby bottle for barbells.

Can we just take a moment and look at how beautiful Lorenzo and Meilani are?!?! ??? @jennijwowwmtv

2. They Both Met Their Men When They Were On the Jersey Shore

Roger Mathews and Jionni LaValle probably didn’t know what they were in for when they first got together with their baby mamas, but they love them nonetheless. During their time on the reality show Jersey Shore, Snooki and JWoww found the future fathers of their children. Their relationships didn’t go smoothly though. Snooki and Jionni broke up several times because Jionni doesn’t like the way Snooki acts when she’s drunk, thinking she’s just too wild. Snooki also slept with her roommate Vinny, which hurt the relationship as well. Since then, Snooki has grown into a wonderful mother and things have completely changed.

As for JWoww and Roger’s time at the shore, JWoww sometimes suspected Roger was cheating on her, which proved to not be true. Another issue with the two of them was their tempers. During a bar fight, Roger accidentally shoves JWoww and the two nearly broke up.

When Snooki first met Jionni and wasn’t even really into him. It’s pretty funny and kind of cute considering most relationships start out that way. 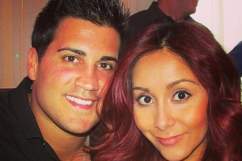 3. Snooki And Jionni Have Finally Moved Out of Jionni’s Parents’ Basement

When Snooki and Jionni moved in together after the Jersey Shore, they moved into Jionni’s parents’ basement. Check out some of the photos of their new digs.

snooki's new house is clearly going to be AMAZING??? pic.twitter.com/qxxfBZe5fi

4. They’ve Both Appeared on Reality Shows Without Each Other

This past year, JWoww and her baby daddy Roger appeared on the reality series Marriage Bootcamp, the celebrity edition. Roger felt that Jenni was being fake and not taking the experience seriously like he was. In addition, Roger wasn’t happy about always being in the spotlight. Check out a clip from the show above.

Jenni and boyfriend Roger got engaged in September 2012. Roger got down on one knee after skydiving with his bride-to-be. On Christmas 2013, it was announced via Twitter that JWoww and Roger were expecting their first baby together.

Nicole Polizzi, aside from her JWoww shows, appeared on Dancing With the Stars and was definitely impressive.

5. Each of the Girls Are Pursuing Careers Outside of Television

JWoww’s estimated net worth is $3 million and Snooki’s is reported as $4 million. But, the two reality stars have to save their money because this is the last season of their reality show together. So, what does the future hold for each of them? Snooki has had her hand in fragrance and tanning lotion in addition to her slippers line. 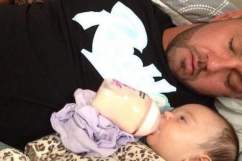 Read More
Celebrities, Jenni Farley, JWoWW, Nicole Polizzi, Reality TV, Snooki, TV
Nicole Polizzi & Jenni Farley are in their final season of reality show Snooki and JWoww. Read on for facts on their babies, plus their men Roger and Jionni.