Yolanda Foster calls her daughter Bella Hadid her rebel child for a reason. Recently, we’ve been seeing Bella appear on the Real Housewives of Beverly Hills with her mother and we’re sure to see more. Read on for the facts on Bella’s modeling career, her arrest over the summer, and her successes.

1. Bella Hadid Got a DUI While Her Mother Was Filming Real Housewives Of Beverly Hills

Over the summer, in July 2014, Bella Hadid was arrested for a DUI at the age of 17 years old. Her mother Yolanda Foster was vacationing overseas with RHOBH co-star Kyle Richards and her family. Bella was back in California when the incident occurred and Foster got a phone call about the situation while relaxing on a yacht with Richards. TMZ reported:

Bella was driving on PCH at around 4 AM when she allegedly blew through a stop sign and almost collided with an L.A. County Sheriff’s Dept. patrol car … Bella blew a .14 — which approaches double the legal limit — but because she’s a minor it’s even worse. She can’t drive with ANY alcohol in her system.

Bella was arrested and released to the care of her stepfather David Foster. To make matters worse, Bella was driving on a suspended license. 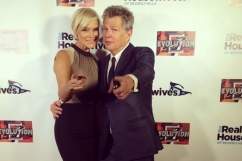 2. She Works For IMG Models

Bella signed with IMG Models over the summer and her mother Yolanda couldn’t resist gushing about her daughter’s success, writing on Instagram:

In addition to modeling, The Inquisitr reports that Hadid has her hand in other areas of the fashion realm, writing:

She launched a line of clothing called Robert Riley’s, which markets “simple jeans,” “insane jackets,” and “pieces that genuinely rep [her] style.”

Like her sister Gigi, Bella left home to attend college in New York City. Bella had her heart set on studying fashion at Parsons University. With her success in modeling, however, we do not know if Bella is putting her college career on hold.

Yolanda Foster was married to Mohamed Hadid from 1994 until 2000. They had three children together, Jelena “Gigi” Noura, Isabella “Bella” Khair, and Anwar. Mohamed is an extremely wealthy real estate developer and actually introduced Yolanda to her current husband David Foster. They have a very healthy relationship.

Mohamed is engaged to Shiva Safai, who has appeared with Mohamed several times on the Real Housewives Of Beverly Hills.

Gigi Hadid has walked the runways of fashion week for many famous designers, has been the face of huge campaigns, and was featured in Sports Illustrated. She’s been making a big name for herself as a model in the fashion industry and is jet-setting all over the world to follow her dreams. Bella is now following both her mother and her sister’s footsteps.