Happy 1st Day of FALL! I'm so excited about pumpkin spice EVERYTHING, cozy sweaters, warm fires, and these cute Aquazzura fringe booties! I think Fall is my favorite season!

Vanessa Minnillo, now known as Vanessa Lachey, is the wife of Nick Lachey. Nick is currently the host of singing competition Sing-Off and VH1’s Big Morning Buzz Live. Read on for all the facts on Vanessa, her career, the couple’s children, and how Vanessa and Nick first got together.

1. Vanessa Fell For Nick When Starring In His Music Video About the Break Up Of His Marriage to Jessica Simpson

Nick Lachey and Jessica Simpson were married from 2002 until the end of 2005 after filming their reality show Newlyweds: Nick and Jessica. Lachey then wrote a song about the break up, titled “What’s Left Of Me.” The music video starred himself and Vanessa Minnillo, who was a VJ for MTV at the time. The video implied that Lachey’s reality show with Simpson was a big factor in the destruction of their marriage. MTV showed the making of the video and Minnillo was openly hitting on Lachey. You can watch it all go down in the above video clip.

Vanessa and Nick started dating in 2006 until they broke up from June 2009 until October 2009. The two rekindled their romance and got engaged in November 2010. The Lacheys married on July 15, 2011, on Sir Richard Branson’s private Necker Island in the British Virgin Islands. The wedding was televised on TLC. You can watch a clip from it in the above video.

Prior to meeting Lachey, Vanessa dated Derek Jeter from 2003 until 2005.

July 15, 2011… I got to marry the best thing that has ever happened to me. He has shown me how to Love, Trust, Respect, Compromise, Grow, Dream, and truly become a Family. I am grateful everyday for the life we are creating… together. And can't wait to see what's next! #HappyAnniversary

That's a WRAP!!! See you next week! @DADSonFOX

Vanessa Minnillo started out as a beauty queen. Celebrity Net Worth reports:

Minnillo went on to host Miss Teen USA in 2004 and co-hosted Miss Universe in 2007. Minnillo has also worked successfully as a model. She’s also acted on several big television shows including 30 Rock, How I Met Your Mother, and Hawaii 5-0.

4. She Has Her Own Fortune of an Estimated $8 Million

Vanessa Minnillo’s net worth is reportedly $8 million. Minnillo hosted Total Request Live on MTV from 2003 until 2007, and she also landed a job as a correspondent for Entertainment Tonight in 2005.

She grew up an Army brat as her father was in the Air Force and moved the family around quite a bit. Her parents divorced in 1986 and they each remarried. Helen Bondoc, Minnillo’s mother has reportedly been estranged from her daughter since she was a young girl. In turn, Bondoc was not invited to the Lachey wedding. Radar Online reported:

Star magazine has learned that her estranged mother, who was not invited to her daughter’s wedding, lives in a lowly trailer park and has not seen her daughter since she was 9-years-old. In fact, Helen Bondoc had no idea that her gorgeous 30-year-old daughter was even getting married.

Bondoc stated that she would love to have a relationship with her daughter today, but doesn’t know how Minnillo would feel about it.

5. Minnillo Left TV To Be A Mother

The Lacheys in Neverland! HAPPY HALLOWEEN!!!

Minnillo was a co-host of ABC’s Wipeout in December 2011, but she left the show in late 2012 to have a baby and was replaced by Jill Wagner. She has one son with husband Nick, Camden John Lachey, born in September 2012. In July 2014, Nick Lachey announced that he and his wife were expecting their second child, a girl. 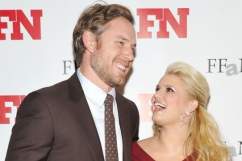