Famed voice actor and DJ Gary Owens has died at the age of 78.

1. Owens Suffered From Diabetes for Most of His Life

Owens was found dead at his home in Encino, California on Thursday February 12. He had been a diabetic since a young age. His family have asked that donations be made to the Children’s Diabetes Foundation.

2. He’ll Always Be Remembered for His Work on Rowan & Martin’s Laugh-In

A Tribute to Gary OwensGary Owens is a voice that just about everyone has heard and knows, even if they don't know his name. From Rowan and Martin's Laugh-In to being the voice of Roger Ramjet, Space Ghost, and Powdered Toast Man, Gary's voice has been a guest in American living rooms for decades. Many of us in the voiceover industry have taken inspiration from Gary's hard work and talent. He helped blaze the trails that many of us have followed in the world of voice acting and we will forever be grateful. This tribute is our way of giving a small thanks to one of the giants of voiceover for everything he has given us. Thank you, Gary. Please note that I've set comments to "Approved" only because as Mr. Owens passed away today (Feb 13, 2015), it is expected that there may be a lot of comments, and since YouTube tends to sometimes attract negative comments and trolling, I've elected to forestall that.2013-02-26T03:03:01.000Z

He was best known for his work on NBC’s Rowan and Martin’s Laugh-In. On his IMDB page, it says that Owens has appeared in the Dustin Hoffman classic, Midnight Cowboy and the 1960s Batman TV show. He was the chosen voice over artist for Bob Hope specials. You can watch a tribute to his work here.

Variety attributes his success to his “impeccable nuanced timing” and “deadpan delivery.” He turned his voice to advertising too, notably for a series of radio ads for Kia cars. At the time of his death, Owens had been working as main voiceover for the Antenna TV network. You can listen to one of his voiceovers here.

Owens pictured with his wife Arleta pictured in 2008. (Getty)

He’s survived by his wife of 57 years, Arleta. The couple also had two sons, Scott and Chris Owens. According to his IMDB page, Chris Owens is a respected musician and producer in Hollywood.

5. He Began His Career in Mitchell, South Dakota

Owens was a native of Mitchell, South Dakota. He got his start in radio by delivering the news on the radio in the town in the early 1960s. By the end of the decade, Owens was in California and in demand. 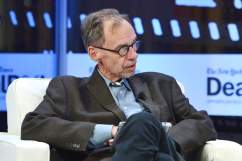 Read More
5 Fast Facts, Breaking News, Celebrities, Deaths, R.I.P.
Gary Owens, a voice actor and DJ, has died at the age of 78. Owens was passed away in his home in Encino, California.