On tonight’s episode of Dancing With The Stars, the theme was Latin Night. Some of the highlights included a brilliant performance from Rumer Willis and val Chmerkovskiy, double amputee Noah Galloway’s set with pro partner Sharna Burgess, and Derek Hough with celebrity dancer Nastia Liukin. Unfortunately, a couple had to be sent home based on their performances from last week. Surprisingly, DWTS superstar Noah Galloway was in the bottom three, along with Chris Soules and Charlotte McKinney. Fortunately, Galloway was announced as safe. Then it was down to Soules and McKinney, but the couple leaving was Charlotte McKinney and her partner Keo Motsepe.

Watch Charlotte McKinney’s performance from tonight in the above video. 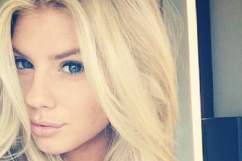