Ever since Robert Kirkman’s zombie apocalypse comic became a TV series, AMC has garnered huge ratings and the type of fan appreciation other cable network shows are hungry for. The Walking Dead ended its 5th season on a pretty grand note. One of the biggest reveals of that evening’s episode though was the unveiling of a prequel to that main series – Fear The Walking Dead. Here’s what you need to know about this Walking Dead spinoff series, it’s confirmed characters and how it came to fruition.

1. Robert Kirkman Announced the Official Name of This Prequel Series on Twitter

The Walking Dead series creator Robert Kirkman took to Twitter to give fans a special treat – the official name for his creation’s spinoff TV series. Before it was known as Fear The Walking Dead, it was originally called “Cobalt.” In September of 2014, AMC ordered a pilot for this prequel TV series. The pilot episode was written by Kirkman himself, along with Dave Erickson. The directing duties for this pilot episode were handled by Adam Davidson.

So far, the entire series run has been confirmed to be handled by a mix of those same Hollywood personalities in other roles – Kirkman and Erickson will take the show’s reigns as executive producers next to Gale Anne Hurd and David Alpert. Erickson has been given the position of being Fear The Walking Dead’s main showrunner.

2. News About the Show’s Development Became Public in 2013

Before the show’s pilot was initially filmed, AMC told the world that they were in the process of developing a companion series for The Walking Dead. After the pilot episode was finalized, AMC made a major announcement about the series in March 2015 – the cable network has already ordered the series for two seasons.

The 1st season will air sometime in late Summer 2015, which will consist of six episodes. The 2nd season will air at an unspecified date in 2016. Once we have official word on the 1st episode airing of Fear The Walking Dead, we’ll make sure to let you all know.

3. The Main Setting of This Show Takes Place in Los Angeles

The main plot for Fear The Walking Dead takes place sometime near the dawn of the apocalyptic zombie outbreak. The main characters of this series are a male divorced teacher, a female guidance counselor and her son and daughter. The actors and actresses for this series is as follows:

– Cliff Curtis plays the role of Sean Cabrera, the male divorced teacher. He’s described as a good man who’s just trying to do right by everyone in his life. He co-parents his son with his ex-wife, Andrea

– Kim Dickens plays the role of Nancy Tomkins, the female guidance counselor who works as the same school as Sean Cabrera. Nancy is romantically connected to Cabrera as well

– Frank Dillane plays the role of Nick Tomkins, who is Nancy Tomkins’ son. Nick Tomkins has the tough task of dealing with a severe drug problem

– Alycia Debnam Carey plays the role of Nancy’s daughter Ashley. Ashley is described as the better half of Nancy’s children, since she has dreams of attending The University of California, Berkeley and leaving Los Angeles behind

The location of this show is set in Los Angeles, California. It will feature a completely original storyline that has no ties to the main comic book series, but it does take place in the same universe as the main television series. 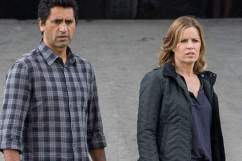 ‘Fear The Walking Dead’: The Cast Members You Need to Know

4. Several Other Character Roles are Being Planned for the Show

The Hollywood Reporter managed to get some intel on the other characters being planned for Fear The Walking Dead:

– Cody: Sean’s son, who resents his father for splitting from his mother; he is described as the angriest kid in town

– Andrea: Sean’s ex-wife, who moved with Cody to the outskirts of L.A.; she is best described as a flower child

– Art: The principal at the school where both Sean and Nancy work, who has concerns about the bizarre outbreak featured on the local news

– Tobias: A wise-beyond-his-years senior at the school who believes the outbreak is Doomsday

5. The 1st Trailer for the Series Has Already Been Released

Fans got to see a sneak peak of the series’ 1st episode in a official trailer that aired during the season five finale for The Walking Dead. A couple of clues could be caught in that 1st trailer – a radio announcer could be heard telling people to get their flu shots. Those flu shots of course could be tied to certain disease that’s ailing the people within five different states. You can check out the trailer for yourself in the link posted below. 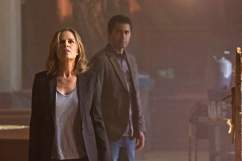 We’ll make sure to keep updating this article as more and more concrete details comes out for Fear The Walking Dead.