4. Michonne and Rosita Finally Caught Up With Sasha

Carl and his new female friend kept running until they came upon a zombie in the distance. The girl threw an alarm clock next to it to distract the walker while she and Carl ran away from it. Glenn then confronted Nicholas while he was cleaning they all came back in. Glenn made it known that he was a coward who had no right to leave the village ever again. Nicholas yelled back at Glenn to counter his points, but Glenn made it known that Nicholas was the type of person that wouldn’t be alive if it wasn’t for Alexandria’s protection.

Carl sat down with his new friend. She told him that it feels right to travel in the woods and discover their surroundings. They both spoke about what led to them being there and how it feels to be in this zombie infused world. When they heard walkers coming nearby, they both ran into a tree enclosing to guide from the horde coming their way. Nicholas turned out to be the one who found Rick’s hidden stash of weapons.

Afterwards, Sasha could be seen continuing her hunt of zombies in the forest. Michonne and Rosita finally found Sasha, who continued going on a rampage against the zombies coming her way. After thinking about her past experiences, Michonne chose to fulfill her desires to kill zombies. She began shooting them down while her two other friends put down even more zombies coming their way. Sasha almost died at the hands of another walker, but Michonne saved her at the last minute. She screamed at Michonne and began breaking down over Noah’s unfortunate accident and death.

5. Rick and Pete Got Into a Huge Fight When Pete Found Him Speaking With His Wife

Daryl and Aaron made their way through the woods and discovered a pile of left over limbs. Daryl noted that this mess just happened recently. Both men continued along their path and kept an eye out for any incoming dangers. They then came upon another horrific scene – a naked female body stapled to a tree. Her insides were torn apart and a W was seen sported on its head. The W seemed to have some sort of significance as a zombie spotted from before also sported a W on its head. Aaron killed the lady once she finally turned.

Rick met up with Jessie in her garage. Jessie tried to explain that she figured she could fix her husband’s abusive ways. Rick told her that she would have to let him handle matters, but Jessie told her that that would only make things worse. Jessie noted that she could take care of herself and neglected Rick’s aid in her marital matters. Rick then went on his way to check on the neighbors living their normal lives around him. Rick then ran into Jessie’s home to let her know that her son asked for a gun to protect her from Pete. He noted that he’d be able to protect her if she would just let him do it. Jessie asked if he would do this for someone else, to which Rick responded with a no. Jessie then decided to let Rick help him.

All of a sudden, Pete entered the room and asked Rick to leave. Jessie told Pete that that wouldn’t happen and that he needed to leave. Pete yelled at Rick to leave his home and then broke out between both men. They then collided and fell right through the side window of Jessie’s home.

A huge group of zombies could be seen walking among the ruins of abandoned homes outside of Alexandria. Sasha continued taking aim when she then spotted Rick and Pete fighting. People from around the way tried to stop them from fighting, but Rick and Pete pushed away their loved ones when they tried to intervene. Rick then pulled out his pistol when Deanna requested that he should stop.

Sasha then spotted more zombies trying to invade Alexandria outside the main gates. Rick yelled at Deanna and told her about her way of doing things, which were failing in his eyes. Sasha kept killing zombies while Rick kept telling Deanna about her flawed methods. All of a sudden, Michonne knocked out Rick to stop him from saying anything more. 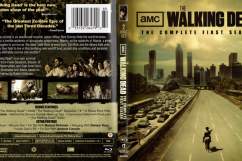