Tyler Oakley is a YouTube sensation who has branched out in a variety of areas to expand his already successful brand and now he’s guest-starring on an episode of MTV’s show Catfish. Alongside host Nev Schulman, Oakley is stepping in as a guest detective to track down the online love of a girl named Daisy. Read on for the facts on Oakley to get to know the social media star a little bit better and get the back-story on his Catfish debut.

1. Nev Schulman Popped Up on Oakley’s Podcast to Give Some Details on Catfish

Tyler Oakley has a podcast called Psychobabble and Nev Schulman stopped by to chat about their episode together. Oakley says that this episode was very unique and full of twists. Schulman talks about the “hopeful” on this episode, whose name is Daisy, and says she is definitely a piece of work. She’s “larger than life” and falls for an online love who goes by the name “Marcus.” 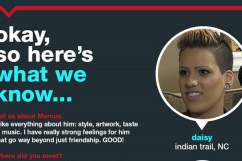 When Schulman first met Oakley, he was walking down the red carpet at an awards show and stopped to be interviewed by a purple blazer-wearing Oakley. Schulman has no recollection of this happening at all. What Schulman does remember is that Oakley won an award at another show, the Teen Choice Awards, and Schulman was there. Schulman was then told more about Oakley and Schulman was intrigued by his “bad ass” side. When they really got to chat was when they happened to be on a flight together. Schulman was on his way to “business class” while Oakley was in first class and he stopped to say “hello” to Oakley. The flight was delayed and the plane sat on the runway, so Schulman decided to go up to first class and chat with Oakley. Once the plane took off, the two made some Vine videos together and then Schulman pitched a guest-hosting gig on Catfish. Oakley accepted.

3. Oakley Credits Some of his Success to Being Gay

Thanks for hanging out with me today during my livestream fundraiser! We raised $20k in just an hour for suicide prevention! Donate: prizeo.com/tyler :]

Tyler Oakley started out on YouTube as a member of the collaborate channel “5AwesomeGays” and has now branched out to become his own brand. Oakley says his success in social media is partly because he’s gay, but not the entire reason, explaining:

It’s not all about me being gay. It’s kind of like an underlying theme for me [with gay life] sprinkled throughout the videos.

Oakley is a big supporter of The Trevor Project, an organization for the prevention of suicide in LGBTQ youth. And, Oakley’s reported net worth is $2 million.

4. In 2014, One Directioners had Some Beef With Oakley

@tyleroakley's face when he saw One Direction's 'You and I' music video. pic.twitter.com/orQcdsmur6

When Tyler Oakley dissed One Direction’s music video for their song “You And I”, their fans aka “Directioners” were not pleased. To fire back, fans began trending the hashtag #BENWINSTONFORPRESIDENT, in support of the video’s director, Ben Winston. Oakley had also said he received death threats when he criticized Liam Payne’s comments in support of Duck Dynasty.

5. When Oakley and Schulman Filmed in Cincinnati They Hit Up a Gay Club Together

While filming Catfish, Schulman and Oakley traveled from New Jersey to North Carolina to Cincinnati, Ohio. While there, they decided to hit up the gay club Below Zero Lounge where Schulman apparently danced his little heart out. They then checked out a drag show. While Oakley is openly gay, Schulman is not and has been romantically linked to a girl named Shanee Pink in the past. Schulman is currently single and tells MTV:

It’s been a while since I was solo, and I’ve been struggling to come to terms with how I feel. Let me give you a metaphor that I think describes my current emotional status: We all know the feeling of being in a nice, warm bath — that fun, weightless, buoyant euphoria often including bubbles and infused with bath salts. Well, if that’s what being in a relationship feels like, then the awkward, heavy feeling when the water drains out and the weight of your body is no longer supported by the water is being single. I was in this symbiotic, supported bathtub of love, and now it’s just me — a cold and naked body against the hard porcelain.

Regardless of this, Schulman said is completely content on being single for the time being.