Frances Bean Cobain is Kurt Cobain’s 21-year-old daughter. She has definitely taken after her father as she’s a burgeoning artistic talent in Los Angeles. In April 1994, when her father committed suicide in Seattle, Frances was less than two-years-old. One week previous she last saw her father at a rehab center he was going to in Marina Del Ray, California. Her life since then has certainly been interesting.

1. Frances is Engaged to an Indie Rocker

She’s engaged to Isaiah Silva. He’s the lead singer of indie-band The Rambles. They’ve been together since January 2010 and got engaged in October 2011. The band have not been very active since February 2013.

In an April 2015 interview with Rolling Stone, Frances admitted that “I don’t really like Nirvana that much.” But she did talk about her favorite music, saying “Sorry, promotional people, Universal. I’m more into Mercury Rev, Oasis, Brian Jonestown Massacre. The grunge scene is not what I’m interested in.” Frances does have time for some of her late-father’s offerings “‘Territorial Pissings’ [on ‘Nevermind’] is a f—–g great song. And ‘Dumb’ [on ‘In Utero’] – I cry every time I hear that song. It’s a stripped-down version of Kurt’s perception of himself – of himself on drugs, off drugs, feeling inadequate to be titled the voice of a generation.” During the interview she also spoke about her father’s legacy “Even if I was in a car and had the radio on, there’s my dad. He’s larger than life. And our culture is obsessed with dead musicians. We love to put them on a pedestal. If Kurt had just been another guy who abandoned his family in the most awful way possible . . . But he wasn’t.”

Frances is a talented artist. Her first show was in July 2010 when she debuted a collection called Scumfuck. For the show she went by the pseudonym of “Fiddle Tim.” In one of her first interviews in January 2006 to i-D magazine she went by this name. Her first participation in an art show under her given name in August 2012. The show was called Mixtape. For it, artists were asked to pick a song and create an artistic expression based on it. Her song was Black by The Jesus and Mary Chain.

3. She Turned Down Tim Burton 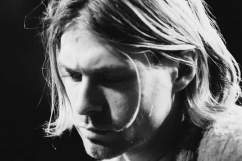 Her 16th birthday party in 2008 attracted media attention as it was suicide themed. The bash was held at Los Angeles’ famed House of Blues. It was paid for by her mother. The idea behind the suicide theme came from her belief that her childhood was dead. The indie band Mindless Self Indulgence performed at the party.

According to CBS News, this comes from her 37% stake of Kurt Cobain’s $450 million estate. In 2010, she became legally allowed to control her fortune. By way of celebrating, she bought a Spanish styled villa in West Hollywood for, according to Zillow, $1.8 million. $65,000 less than what the four bedroom house was first listed for.