It seems like we’ve waited forever for the next blockbuster release in the Mad Max series. After years of unsuccessfully bringing Mad Max: Fury Road to fruition, we have finally arrived at the moment where it’s finally a reality.

This upcoming summer blockbuster takes us back into the post-apocalyptic wastelands of the series we know so well. This time, Tom Hardy will take on the role of “Mad” Max Rockatansky. Max will fight alongside Imperator Furiosa (played by Charlize Theron) and go to war against their adversaries with their wild vehicles in tow. Besides the main plot line, there’s tons more information regarding the return of Mad Max.

Here’s everything you need to know about Mad: Fury Road.

1. This is the 4th Film in the Mad Max Film Series

Throughout the entire run of past Mad Max films, the theme and international tone has stayed the same – an Australian dystopian action film that’s set within a post-apocalyptic world. The men and women who still reside in that world make their way around with the use of wildly designed automobiles.

2. The Plot Focuses on Two Lead Heroes Looking to Escape the Pursuit of a Tyrannical Leader

Mad Max: Fury Road is set within the year 2060. Civilization is hanging on by a thread due to a series of catastrophic events, which has forced everyone to survive within a desert atmosphere. Max is one of those survivors, but he is on his lonesome due the death of his family. Max ends up on the run after being caught and tortured by a maniacal leader named King Immortan Joe (played by Hugh Keays-Byrne) and his group, the War Boys.

After running into a women named Imperator Furiosa and her band of former female captives (The Five Wives), Max looks to keep them safe from King Immortan Joe. Joe seeks them out because of his mission to use the Five Wives to help breed the next generation of the human race in his image.

3. This Film Has Been in Development for 25 Years

This 4th installment in the Mad Max series has been stuck in its development stages for close to 25 years now. The wheels started turning in film director/producer George Miller back in August 1998. At one point, the film was scheduled to undergo shooting in 2001, but the traumatic event of 9/11 put those plans on hold. A script for the film surfaced in 2003, which led to its pre-production stages going into motion that same year.

But, the movie failed to gain any ground once again due to security concerns over the film’s planned filming location in Namibia. Mel Gibson had originally been cast to star in the film, but he left the project after production was brought to a halt. After several years passed, Mad Max: Fury Road finally went underway in 2012 (it wrapped up filming on December 17, 2012).

4. The Film Was Shot With a Storyboard Instead of a Traditional Script

While conducting an interview with io9.com, actress Charlize Theron revealed that her and the rest of the cast worked off of a storyboard instead of a script. She also noted that they actually shot a huge scene for 138 days:

Well, I feel like us actors kind of set out this rumor that there was no script. I wonder, I haven’t talked to George about, but I wonder if he’s upset about it. Because there was a script; it just wasn’t a conventional script, in the sense that we kind of know scripts with scene numbers. Initially it was just a storyboard, and we worked off that storyboard for almost three years. And then eventually, there was a kind of written version of the storyboard, which just felt like a written version of the storyboard, again not like a script.

I think the hardest thing for us, as actors, to get our heads around, was that the movie really was one big scene. Usually you have scenes and this was one big scene. So we shot one big scene for 138 days. That was tricky because everyday you show up and you don’t really know where you are in that scene. George was really at understanding what he wanted. And the movie was in his head. After a while, we all understood that we just had to let him do his thing. 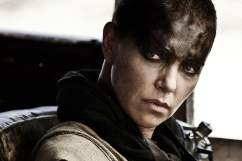 5. The Film was Primarily Filmed in the Namib Desert

Mad Max: Fury Road’s desert setting came to life due to its being filmed in the Namib Desert. This coastal desert, which is located in southern Africa, is popularly referred to as “the land that God made in anger.” Not only is it the oldest desert in the world (aged roughly 55 to 80-million years old), its temperature can reach up to over 100-degrees or more.

6. It Has Been Highly Praised by Film Critics

Mad Max: Fury Road has pulled in a good amount of high rating from critics before it’s worldwide release. Rotten Tomatoes has the movie listed under a 98-percent positive rating thus far. IGN awarded the film with a rating of 9.2. Their final verdict on the film can be explained by the quote seen below:

The over-the-top stunts and eccentric characters and designs are all hugely important to Fury Road, as are the troubled figures like Max himself and Furiosa, but it’s the overriding sense of the film’s uniqueness, its striving to be something more than just another action movie, that is most impressive. Mad Max: Fury Road is a one of a kind. Like the world it creates, it is a thing of beautiful brutality.

7. The Film Has Been Criticized for its Seemingly Feminist Agenda

While the film has garnered a mostly positive critical response, it has also gotten caught up in some controversy. Some have complained about its perceived pro-feminist agenda. This controversy has been brought on by the major screen time given to Charlize Theron’s character and the use of Vagina Monologues author Eve Ensler’s material. Men’s Rights Activists have even called upon men to boycott the film, a movement that has been detailed in this blog post by Aaron Clarey.

8. An Art Book and a Comic Book Miniseries Will Be Released

DC Comics’ Vertigo imprint will be releasing a series of art-based book based on Mad Max: Fury Road in May 2015. Mad Max: Fury Road: Inspired Artists will feature several artists’ take on the movie’s universe.

A set of four prelude comic book tales will follow several of the film’s cast, too – Nux, Immortan Joe, Furiosa, and Mad Max. Staring on May 20, 2015, the series will begin with MAD MAX: FURY ROAD: NUX & IMMORTAN JOE #1 and be followed by another installment each month. Those proceeding releases include MAD MAX: FURY ROAD: FURIOSA #1 and MAD MAX: FURY ROAD: MAD MAX #1 & #2.

9. Additional Sequels are Already in the Works for the Mad Max Franchise

George Miller and Brendan McCarthy ended up writing a ton of material for Mad Max: Fury Road. So much so that they had enough material for two extra scripts that will lead to more films in the series. A future sequel focused on Charlize Theron’s character (Mad Max: Furiosa) has already been announced. Tom Hardy has already signed on to star in four more Mad Max films.

10. An Upcoming Console Game Based on the Film Series is Releasing in 2015

Mad Max is not only making its return to theaters, it’s also looking to dominate the console gaming landscape. The 1st time the series landed on a video game console was back in 1990 with the NES release of Mad Max, which was originally developed by Mindscape Inc.

Video game development studio Avalanche Studios is in the process of producing another Mad Max game, which will release on September 1, 2015. This massive, open-world action game will be playable on the Xbox One, PS4 and PC. Developer Kabam will also be throwing themselves into producing a Mad Max game as well, which is planned to be a mobile release.