Rumer Willis is competing on Dancing With the Stars season 20, alongside pro partner Val Chmerkovskiy and she’s the contestant to beat in 2015. Recently, the Boston Herald published an interview with Willis, who opened up about the show and said that fellow contestants Nastia Liukin and Riker Lynch are her biggest competition. She also opened up about being bullied throughout her life, saying:

Growing up, I was kind of a nerd. I had a hard time connecting with my peers. I was very much bullied my entire life. I was just so insecure with who I was that I kept trying to change myself to fit into what I thought everyone wanted. When social media started to boom, I was 14 or 15. Every time I went out in public and was photographed, people had something to say about how I looked. The worst things I read were that I looked like a man, or simply that I was ugly. Any time I looked good, a story would say I had plastic surgery. Because God forbid I just looked good being me!

Today, she deals with a lot of negative comments online that sometimes get to her and she wants to spread the message that you should build others up as opposed to trying to tear each other down. She hopes to shed more light on cyber-bullying and says her mother Demi Moore has given her advice over the years, telling her:

Don’t let that infect you. People are going to have opinions. You don’t have to make them yours.

Even though Willis loves her mother dearly, she often felt inferior to her, explaining that:

I compared myself to her. I would go, “My mom wears smaller jeans than me! Oh, God. Maybe I’m not skinny enough.” Every girl looks up to her mother, but my mom was larger-than-life and I felt I could never be like her. I just didn’t feel like we were even the same caliber.

In addition to the support of her mother, her dad Bruce Willis is a huge support system, though she doesn’t get to see him as often as she’d like. She’s also extremely close with her sisters who cheer her on each week in the DWTS ballroom. As for what Willis has planned after the show, she says that:

I’ve been working with (“Beautiful” songwriter) Linda Perry and I’m going to try to put a song out before the show is done. I want to do everything: Broadway, TV, movies. And I’d love to keep dancing. I never thought I’d make it this far. It’s a dream come true.

DWTS judge Len Goodman has said that this could be the year that Val Chmerkovskiy takes the win with contestant Rumer Willis at his side. Do you think these two will take home the mirrorball trophy this season?

For more information on Rumer Willis, check out the below links: 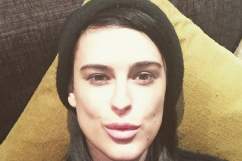 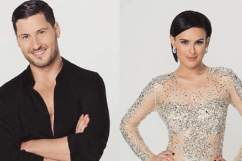