While the girls try to escape from “A”‘s clutches, we see another blonde prisoner who is away in the darkness. The girls realize they are trapped within an electric fence after the doors to their “prison dollhouse” shut behind them. The music stops and all the lights go out. As it begins to pour, the girls try to stay warm until morning. A day goes by and they’re freezing outside at night once again. When it reaches morning again, the doors reopen and the girls decide to venture back inside. “A” approaches the girls and sets off a gas bomb, but gives Mona a gas mask, which he puts over her face. The girls all wake up lying on slabs under white sheets as if they are in a morgue. Spencer thinks that “A” wanted them to look dead in order to send a message to their families. Mona comes in as a nurse handing out medicine and insists on being called Alison. An announcement comes on the loud speaker saying that the girls have to go to their rooms for their “surprises.” At first Mona states “no,” but then follows orders because she says if orders aren’t followed, they’ll end up “in the hole.” The other girls go to their rooms and each of them are heard screaming.

The next scene jumps 3 weeks, after Alison’s having been released from jail. She speaks to the press about her friends’ kidnapping and about Mona’s being alive. She also says, “Andrew, if you’re listening, please don’t hurt them.” So, is Andrew Campbell in cahoots with “A”? That’s what we suspected by last season’s finale episode. With the police at her house, Ali gets a phone call from “A” that is just music playing. The police trace the call to inside Ali’s house. The only thing they find is a dummy in a hoodie and a pig mask with a cell phone that makes pig noises. They also find a broken wine bottle and Ali goes missing. Meanwhile, Ali is running outside and the police believe she’s running away to the Campbell apple farm to confront Andrew without them. This was all a diversion so that Ali could get away from the house. With the boys (Caleb and Ezra) at her side, she feels safe … for now.

In the meantime, the girls are let out of their rooms finally and are told to go to Ali’s room and “prepare for arrival.” When they go into “Ali’s room”, they find boxes of Ali’s stuff from her house. It’s then revealed that the girls had to sign a welcome card for Ali. With Ali supposedly on her way, they worry about Mona’s well-being because she was always the pretend Ali for “A.” Mona has been put in “the hole.” Aria is looking in the closet of “Ali’s room” and finds something carved inside, discreetly showing Spencer that it says “He’s going to kill m …”

Ali is walking through the woods, wearing boots with a tracking device in them, and she starts to hear music playing. She comes to a car and gets inside. She starts the car and begins to follow the GPS’ directions.

Spencer tells the girls that she insists on escaping and finding Mona. She also lets them know that Charles is a DiLaurentis.

Mona is trying to keep herself from going crazy while she sits in the hole, singing to herself. In the meantime, Ali arrives at Tyler State Park in Pennsylvania, where the car’s GPS says she’s reached her destination. The car then dies and she realizes she has no cell service. She tries to call roadside assistance and the male voice tells her to open the trunk of the car. It’s clear that she will not be getting any assistance and the voice does sound like Andrew. As the boys are following Ali’s tracking device, they feel something has gone wrong. As the boys reach the car, they find a welcome car for Ali and follow the trail of her clothes to try to find her. Toby and the police have tracked Andrew’s car to Tyler State Park and are on their way there.

The girls try to escape and the alarm goes off. While trying to escape, they find a huge vent that they use as a passage-way. Upon finding it, the alarm goes off, which is strange. They then find the room where the home movies of “A” was playing via projector. They begin to watch the footage and Spencer says, “Game on, Charles.” She then destroys his precious family footage, burning it as she demands he return Mona. They begin to burn his childhood belongings as “A” views Ali waiting outside. Caleb and Ezra find Ali as the fire that the girls started begins to spread. The girls try to cover the fire with a blanked and find “A” watching them from behind a glass wall with a mask on.

The girls continue to burn “A”‘s belongings and he sets off the fire alarm so that the sprinklers will stop the fire. This happens just as Ali and the boys decide to leave. They then return upon hearing the alarm and seeing smoke. In the meantime, the girls find Mona and rescue her. The girls find their way out and are rescued by the police, Ali, Caleb and Ezra. Then, the police rescue the other girl who was in captivity and she tells them her name is Sarah Harvey.

Spencer and Toby kiss and Ali gets asked who Charles DiLaurentis is … On the next episode, Ali asks her family that very question. 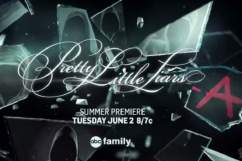 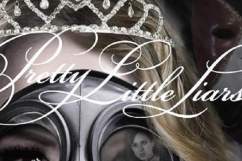 Charles DiLaurentis on ‘Pretty Little Liars’: Who Is A?