Benton Blount is one of the talented musicians appearing on season 10 of America’s Got Talent. His performance of Dolly Parton’s “Jolene” is what catapulted him into the live shows for 2015. Read on for the facts on Blount and why he’s a winner.

1. Blount Believes He Gets Judged As a Country Singer

In Benton Blount’s Reverbnation biography, he states that some may question him being a country artist because of his appearance. Blount writes:

Benton Blount knows to trust his instincts. Repeatedly through his career, he s moved forward by walking through an open door, even if making that step defied logic at the time. I ve had to stop wondering why all my dreams seem to keep coming true and moving me forward, Blount says. I ve learned to trust that singing and writing songs is what I m supposed to do, because every time I focus on my music, new opportunities suddenly present themselves.

I know people look at me, with my tattoos and apperance, and they don t think I look like a country singer, he says. When I sing, I have a gruffness to my voice that s different than most country singers too. But when I start to talk, you can hear that I m as country as cornbread. And the songs, with their real-life stories and positive outlook on life, have more in common with country music than anything else. Country music is where I belong.

2. Family Is Number One To Him

Checking out the big apple with the family @nbcagt style!! #AGT

Aside from music, Blount is a family man. Have a look at the cute pic of him, his wife and his child in the above photo. His son’s name is Jaxon.

Benton Blount already has a ton of tour dates set up for the Fall, starting on September 4, 2015. Click here to check out all his tour dates and stops to see if he’s performing in a city near you.

Blount has been lead singer of a band called 7-miles since 1997, according to OurStage.com.

4. Blount Was A Troublemaker In School

I was a little trouble maker in Jr High School and here is proof! #AGTfacts

When Blount was in school, he says he was a troublemaker and quotes himself, saying he would sleep through his independent study class. Have a look at the above photo of him from junior high school.

5. His Pastor Got Him Into Singing

It's always a good day when you are wearing Blue Shark Optics! #teambenton #TeamBSO

Blount grew up in the mountains of North Carolina and had never played an instrument or performed music. When he was 18 years old, his music pastor put a microphone in front of him and he stunned listeners with his amazing voice. OutStage.com reports that this sparked his love for songwriting and singing. 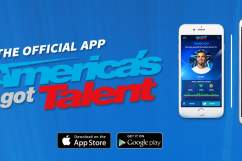