Andy Grammer may be an amazing entertainer, but now he’s working extra hard as a contestant on Dancing With the Stars. Last week, his official pro partner Allison Holker announced that she was pregnant with her second child, so it was a big night for the dancing duo. This week is the “switch up” episode of the show and Grammer’s new DWTS partner for the night is Sharna Burgess. Burgess is currently paired with Backstreet Boys star Nick Carter.

Throughout the past week, Grammer and Burgess have gotten to know each other well and even did some charity work. In Los Angeles, they visited the children’s hospital, sang with the children and then gave them a little dance performance.

On tonight’s episode of Dancing With the Stars, Burgess and Grammer are dancing the Tango. 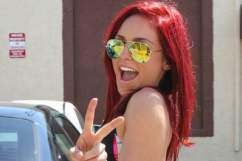