Kenya Moore is reported to set her sights on a younger man on this season of Real Housewives of Atlanta. So, does Kenya Moore have a new boyfriend? Is she dating anyone right now? Read on for what we know.

According to Radar Online and Reality Tea, Moore has been seen in recent months with a new guy and she showed up at a Kenya Moore Hair Care event with him by her side. His name is Eugene Casciaro and he owns a truck dealership in Atlanta. The two have shared photographs together on their social media accounts and were reported to be dating. Unfortunately, Casciaro has a bit of a criminal history, according to Radar Online. Radar reports that in the past, he was arrested and charged with “simple assault and battery and making terroristic threats.” Even so, the charges ended up getting dropped. So, for all anyone knows, Casciaro is actually a nice, regular guy.

His smile though… #happy

When Moore was made aware of the criminal reports that were dug up on Casciaro, she posted the following message on Instagram:

It is a slow ‘news’ day when you dig up someone’s 8 year old mug shot when the charges were dropped That’s a criminal? #LetMeLive #TheyTriedIt #BelieveNothingYouHearAndHalfOfWhatYouSeeNow.

There have been several reports that some believe Moore’s relationship with Casciaro was faked for Real Housewives Of Atlanta. 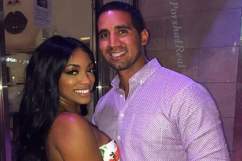