The Bold and the Beautiful returns on Friday with an all-new installment, as Nicole (Reign Edwards) pushes Rick (Jacob Young) to reconsider Forrester Creations decision to take on Sasha (Felisha Cooper).

Nicole Protects What’s Hers From Sasha 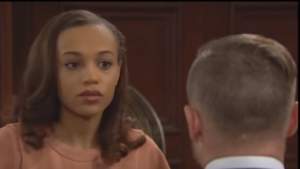 Pictured left to right, Nicole and Rick, as she insists to him that employing Sasha wasn’t a good decision. (CBS Screenshot)

Nicole hasn’t been having the greatest time overcoming her pregnancy-related issues. If her prior relationship complications with Zende (Rome Flynn) weren’t enough, she now must deal with him working closer to her bestie, Sasha.

Lately, Nicole has done her best to accept the twosome’s collaborative success, even saying that they make a great team. However, Nicole has grown jealous of Sasha as she increasingly meshes with Zende in the studio.

On Friday, Nicole resumes her displeasure with Sasha’s Forrester Creations employment . She repeatedly insists to Rick that Sasha, moving forward, could manipulate Zende.

“If she were modeling and working with Zende all the time, she may take unfair advantage. I know her, and she’s not above it.”

Nicole makes it clear that she has no shame in having Sasha’s opportunity snatched from her.

There’s nothing wrong with protecting what’s mine.” 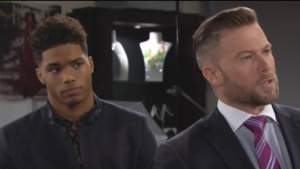 From left to right, Zende and Rick, as the latter informs Sasha that she’ll no longer be working for Forrester Creations. (CBS Screenshot)

Later, Rick — seemingly convinced by Nicole’s thoughts — rescinds his offer to Sasha. Zende stands by with a blank face.

“I don’t think you modeling for us is gonna work out after all.”

After witnessing Rick’s decision, Zende shares how he felt about it, which could indicate his level of care for Sasha.

“I just watched someone’s dreams get shattered right in front of me. And I tried to play it off like it didn’t matter.”

Will Zende tolerate Nicole’s jealousy, or will it pull him closer to Sasha? Stay tuned.