The Young and the Restless returned on Tuesday with a brand new episode as Nick (Joshua Morrow) becomes skeptical about Dr. Anderson (Elizabeth Bogush) while Victor (Eric Braeden) is informed that Marisa (Sofia Pernas) is the wrong girl in Adam’s (Justin Hartley) exchange. 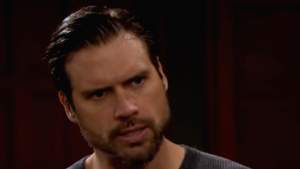 Dr. Anderson has been plotting revenge on Nick for quite some time now. Initially, she became heavily involved in Sharon’s (Sharon Case) life, as the latter credits her for getting off her meds. However, she’s recently turned her focus to Sage (Kelly Sullivan), the object of Nick’s affection. Dr. Anderson warned Nick that if he didn’t steer clear of Sage, then she could end up one of her patients.

What Nick don’t realize is he impregnated Dr. Anderson as a teen and she lost that baby — and the ability to get pregnant — via Newman Ranch diving incident. Hence, she’s looking for payback.

On Tuesday, Nick asks Victor what happened to Adam. Victor tells him that there’s nothing to worry about; he shouldn’t concern himself with Adam’s situation. Elsewhere, Marisa passed out with her wrists bound to a bed frame.

Nick tells Chelsea that Victor wants them to stay out of it. Chelsea says, “like hell” she will. He tells Sage (Kelly Sullivan) that he’s glad he’s out of Newman Enterprises so he can focus on her.

Later, Dr. Anderson asks Sage how her and Nick are doing. Sage says that they’re great, and “will continue to be great as long as” she stays “the hell out of their life.”

Nick sees this and tells Sage to relax. She tells him that she’s concerned that Dr. Anderson is always around them.

Later, Nick admits to Dr. Anderson that she’s the reason for himself and Sage’s earlier disagreement. Nick tells her that Sage thinks that she only cares about him. Dr. Anderson insists that she’s just trying to help them. Nick wants to know what her agenda is. Meanwhile, Sage goes to the hospital to request Dr. Anderson’s records and credentials.

Meanwhile, Abby (Melissa Ordway) flashes back to when Stitch (Sean Carrington) told her she doesn’t know anything about love. She informs Devon (Bryton James) about what Stitch had told her at a nearby table. They reminisce about the mistakes they made while in love. Abby says she knows Stitch loves her, but you can’t catch everyone. She informs Devon that she has “to take a backseat” to Max (Jared Breeze). Devon doesn’t think that pertains to himself and Hilary (Mishael Morgan). 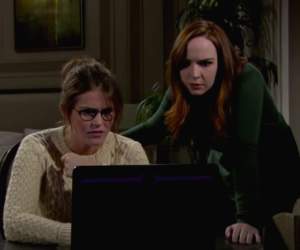 Pictured left to right, Natalie and Mariah as they hacked into Victor’s email on Monday’s Y&R episode. (CBS Screenshot)

Chelsea (Melissa Claire Egan) hasn’t had the easiest times lately. Not only did she battle with jealousy issues over Sage, but also wants another baby with a hesitant Adam. Despite this, she still loves her husband, who was recently kidnapped.

On Tuesday, Luca (Miles Gaston Villanueva) and Noah (Robert Adamson) brainstorm about what happen to Marisa. Noah informs Sharon (Sharon Case) doesn’t understand why Dylan (Steve Burton) needs to work for the Genoa City PD. After Dylan’s explanation, she seems to better understand Dylan’s motives to be a detective. Chelsea interrupts, saying she needs Dylan’s help. She tells him that Nick overheard Victor talking to Kevin about “the girl.”

Later, Luca insists to Noah that his father isn’t involved in Marisa’s disappearance; Kevin overhears them.

Victor requests that Kevin trace the ransom email. Victor emails the ransom sender back with:

“I have the girl. I need proof you have Adam.”

Kevin assures Natalie that she’s safe for now because Victor thinks the Santoris are behind it. Later, Natalie runs away when Mariah goes to check on a noise in Kevin’s building.

Dylan goes to leave and Sharon stops him; she doesn’t want him getting involved with Victor. Dylan says Paul (Doug Davidson) trusted him with this case; Victor doesn’t scare him.

Later, Sharon accuses Chelsea of putting Dylan under Victor’s buzz-saw. Chelsea says it’s not about her and her past mistakes, it’s about Sharon and Dylan. Sharon soon apologizes about before. Sharon assures her that Adam’s a survivor, he’ll be fine.

Marisa — still tied up by the hands and feet — wakes up and yells for help. Meanwhile, Victor views a photo on his computer of Adam tied up in a chair.

Noah tells Luca they need to figure out how to get Victor to let Marisa go; even it means going to the police.