Tonight’s episode of Undercover Boss features Muscle Maker Grill’s Tim M. Betts and Rod Silva. The official synopsis reads: As Tim M. Betts, the new chairman of Muscle Maker Grill, goes undercover, Rod Silva, the high-energy founder of the company, secretly gives Betts ongoing commentary as he observes the action via a live video feed, on Undercover Boss. Check out all the info on the episode below as well as some clips from the show and background on the company.

Generally, Undercover Boss features one person who is representing a company on the show and this time there are two, though only one of them goes undercover. Muscle Maker Grill was first owned by Rod Silva until Tim M. Betts bought the company. Rod Silva stayed on as the Director of Branding and face of the company. So, it is Betts who goes undercover, but Silva gets to watch Betts on camera, making double the fun for viewers. Check out the introductory clip of the two above.

In the above clip, you will see how Betts and Silva differ in their opinions of what is professional or not. While Silva feels a certain employee’s flirting skills are good for business, Betts feels that it’s completely inappropriate. He also feels the employee is unprofessional in her demeanor when he struggles with taking an order from a customer.

3. A Struggle for Betts Was Keeping Up With the Pace

Not only did Betts have a hard time keeping up with the fast pace of taking orders from customers, he also struggled with chopping chicken. In fact, one of the employees was worried Betts would accidentally chop off one of his fingers. Check out the clip above.

4. Betts Gets in Trouble for Making Small Talk

When Betts works on one of the Muscle Maker Grill food trucks, time is a big issue. Being on a food truck requires speed and Betts starts to make too much small talk with customers to get things moving. Watch him as he gets reprimanded in the above clip.

5. When a Customer Doesn’t Pay, Betts Has to Go Back and Collect

Betts works the delivery route with an employee and realizes that he did not collect his payment from a customer after leaving their house and heading to the car. And so, Betts has to carry out the uncomfortable task of going back and asking for the money. Check it out in the above video clip. 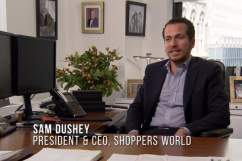